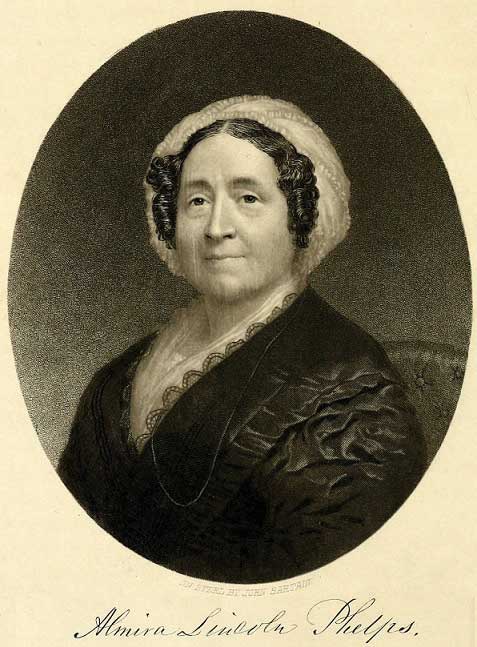 Although unknown to you, we are not strangers to your sufferings… We mourn over your distresses and desire to administer to your relief; we make you an offering, which though small compared to your necessities, we hope may contribute in some degree to alleviation of your suffering

For early Americans who understood that the moral stability of a nation originated with the wife and mother in the home, the Ottoman harem was viewed as the ultimate manifestation of depravity and despotism. The vision of the ideal chaste Greek female—modest, demure, and in need of protection—represented all that the ladies’ aid societies wanted to help with their donations. For American women, however, discussions of Greek slavery and Turkish oppression contributed to conversations on the persistence of female oppression at home. The rhetoric about the Greek cause used by these Greek aid societies played a part in the emerging women’s rights movements and the abolitionist cause in the decades that followed.

American women helped raise tens of thousands of dollars, and perhaps more, for the Greek cause. Ladies’ groups primarily directed their efforts at gathering food and clothing for Greek civilians. Funds were raised by knocking on doors, advertising in newspapers, speeches, carnivals, and balls. Although much of the more active organizations existed in northern cities, activity also took place throughout southern communities.

Female Greek aid societies also provided monetary support and funds for education to Greek refugees as well as the construction of schools in Greece. The Ladies’ Greek Committee of New York and The American Board of Commissioners for Foreign Missions worked in conjunction with Emma Willard (1787-1870), the founder of the first female institution for higher education in the United States, to establish the first American-run schools in Greece in 1828. 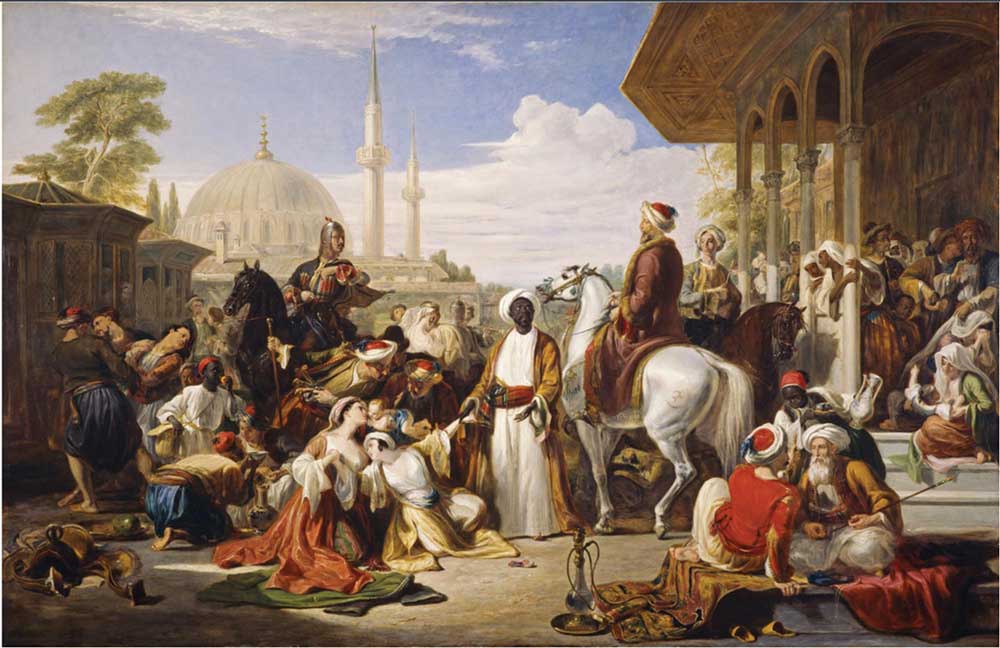 American women reflected on the abuses and bondage of Greek women by the licentious Turkish soldiers and princes. These images contrasted with their Victorian values and motivated them to help the Greek cause. Image: The Slave Market, Constantinople, William Allan, 1838.

Reflecting ideas of Victorian domesticity and Christian evangelical missionary values, American women imagined Greek women as the ultimate group of victims because they were subjects under the Turks as well as their link to ancient Greece. Image: The Contest for the Bouquet: The Family of Robert Gordon in Their New York Dining-Room, Seymour Joseph Guy, 1866. 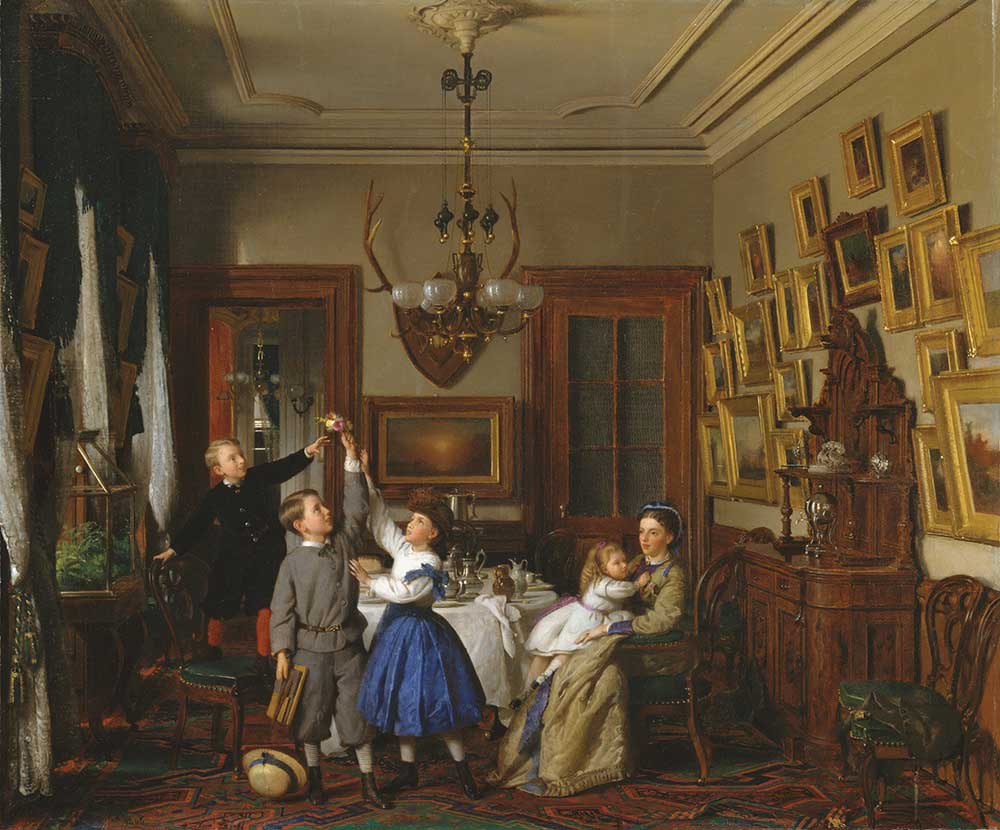 To the Ladies’ Greek Committee of the U. S. 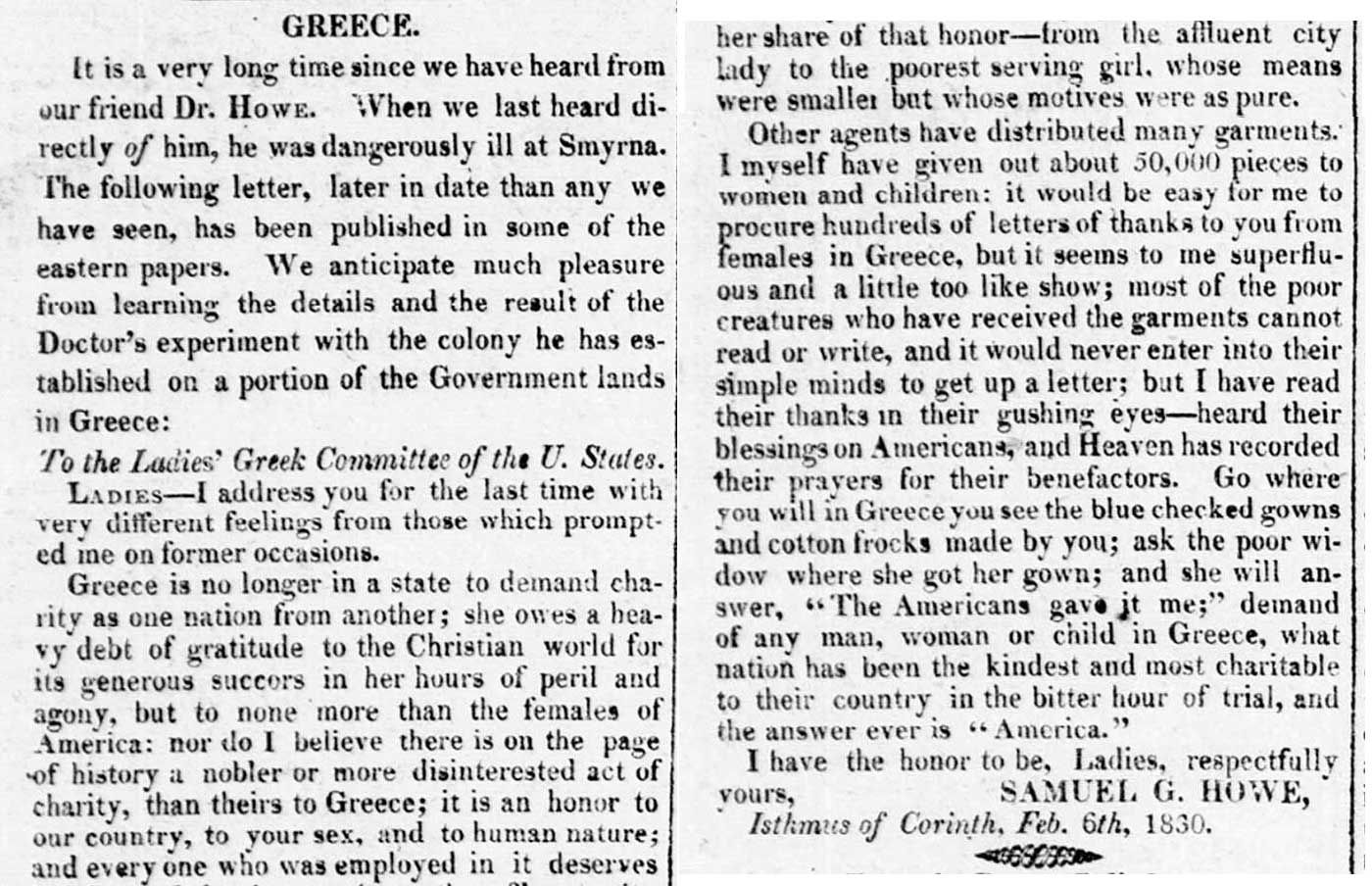 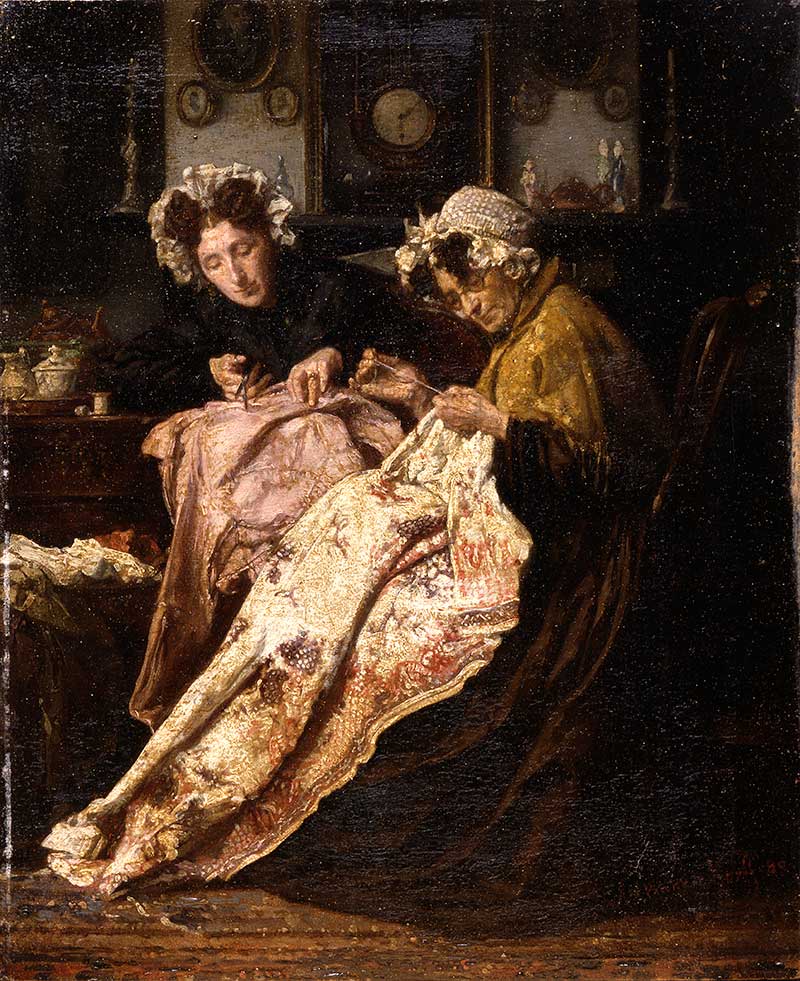 The ladies of Providence, Rhode Island, and surrounding communities alone produced over 3,000 items of clothing. Even in smaller communities such as Canandaigua, New York, local ladies set to work with “their needles in making clothing for the Greek women and children.” 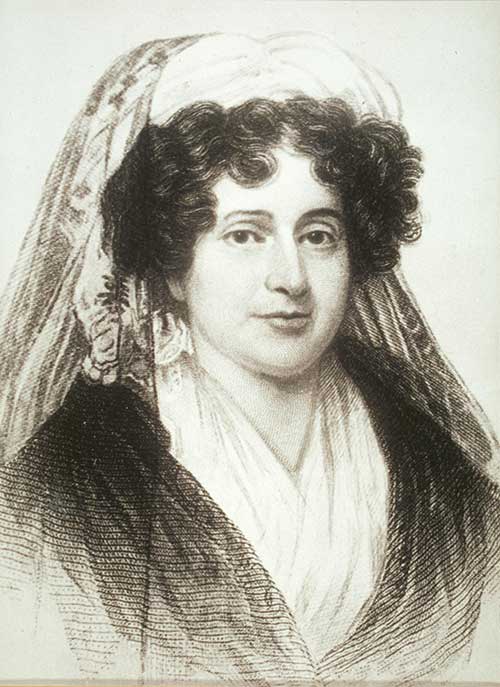 Emma Willard was an activist for female education establishing a school for females in Greece as well as the Troy Female Seminary in Troy, NY. Inspired by a lecture by Samuel Gridley Howe, Willard held that the way a nation educated its women revealed how civilized that society was as a whole. 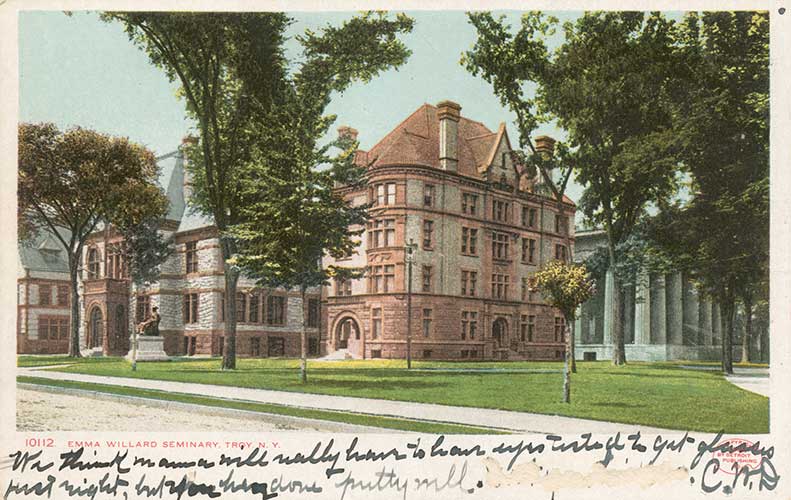 Woman in this delightful region, has ever been degraded. In looking back to the glorious days of the Grecian republic, a gloomy picture of her condition presents itself; more gloomy because there was light around her, and yet she was in darkness.

…when we consider what they have since endured from the licentiousness of Turkish soldiers and Turkish princes, or from the servitude to which they have been condemned, can we but feel our hearts burn within us with the wish to elevate the Greek female in the scale of being, and to impart to her some of the blessings of improvement so richly bestowed upon us? 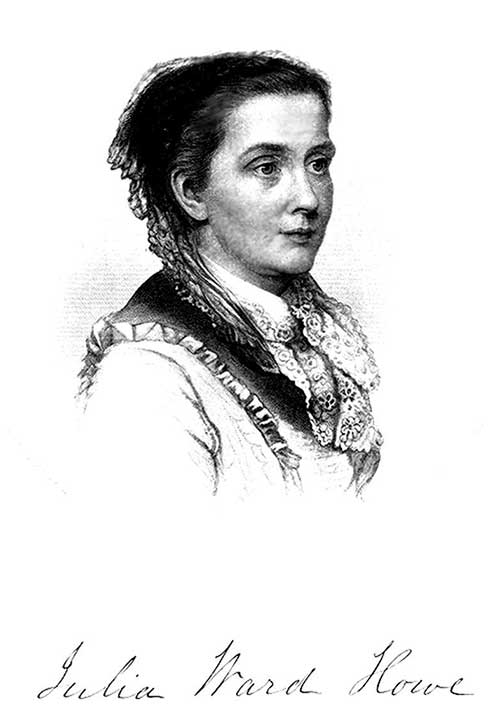 Julia Ward Howe, a prominent abolitionist and advocate for women’s rights penned the lyrics of the Battle Hymn of the Republic. Married to Samuel Gridley Howe, the two were activists in the fight for freedom and liberty for humankind that included not only Greece but the black slaves in the United States. 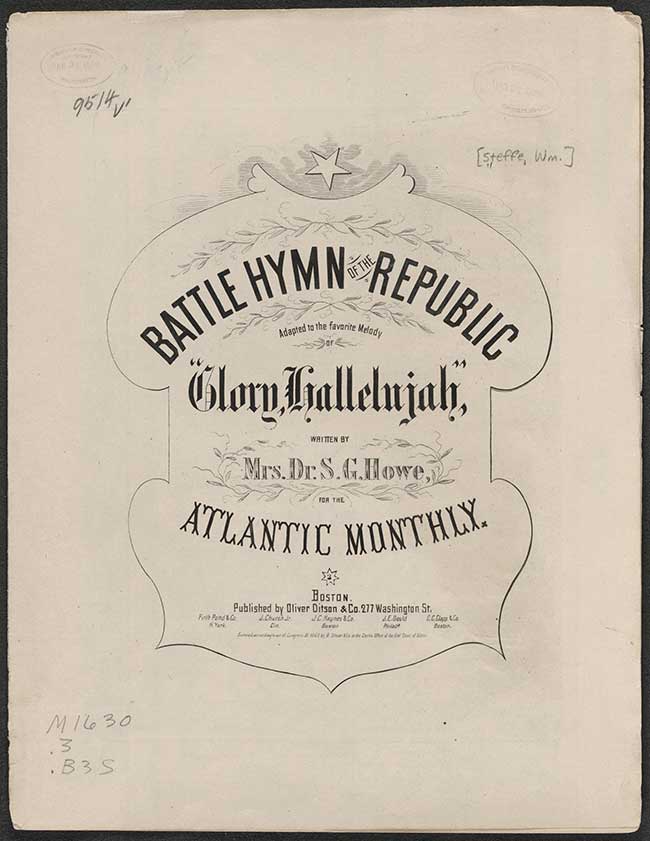 (Document reproduction courtesy of the Norman B. Leventhal Map & Education Center at the Boston Public Library)

Cover of 1863 sheet music of the “Battle Hymn of the Republic.”

"The Independent Benevolent Society of Philadelphia" (1811) reflects the domestic values of the day. 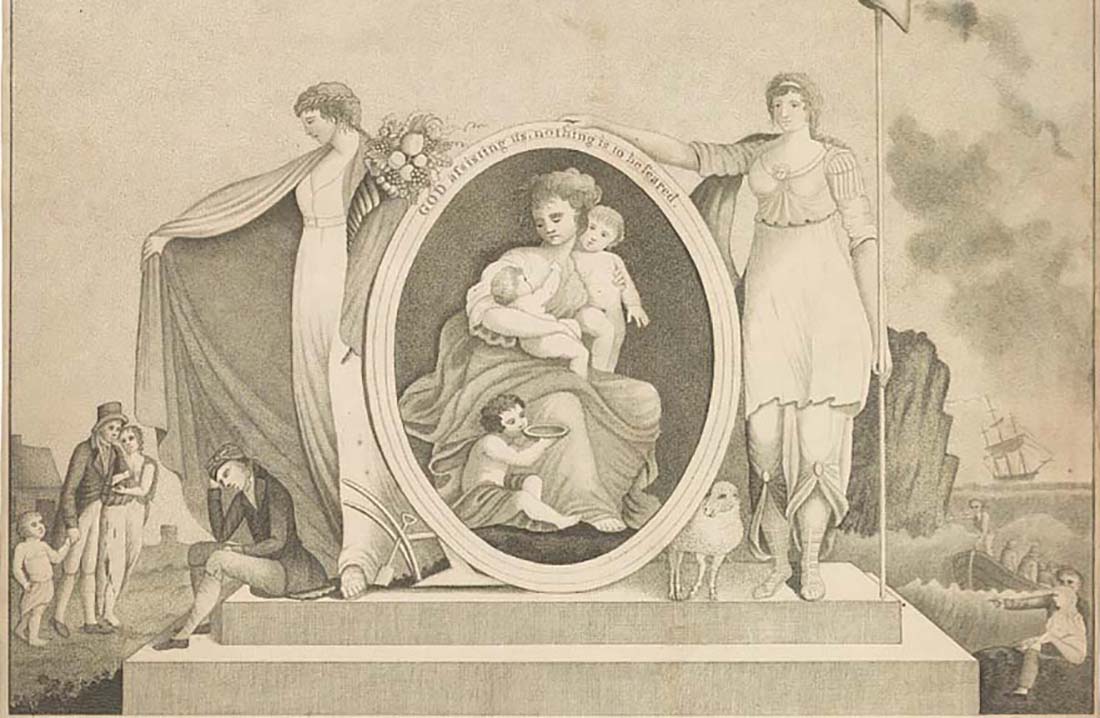