Home » Exhibition » Greek Fever » Too Much A Greek

Too much of A Greek

“In his habits, truly a Greek” 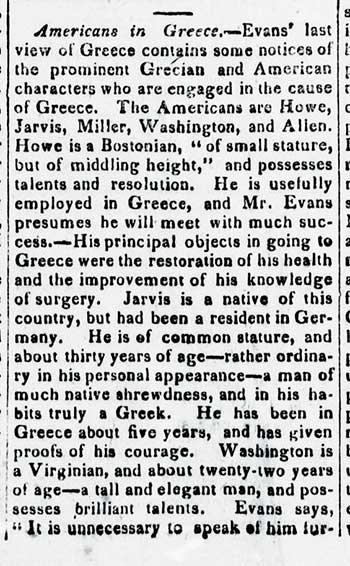 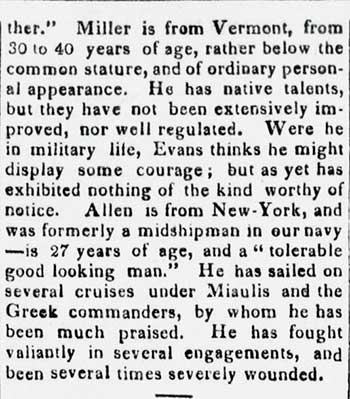 George Jarvis was the most unlikely American hero of the Greek Revolution. He had never set foot in the United States, having been born to an American merchant in Denmark and raised in Europe. As Jarvis wrote in his 1826 letter to Secretary of State Henry Clay, he needed proof of citizenship because “No Nation acknowledged me.” But if no country had claimed him, it is evident from his writing and life that George Jarvis had claimed Greece as his country. Jarvis does not seem to have received much education. His English and French suggest little formal training. His German, while better, was still idiosyncratic, and his written Greek was poor. The reason for his decision to join the Greek cause is not clear.

Upon his arrival in Greece, Jarvis connected with the most notable Greek figures of the revolution, and participated in many of the important battles. He received the rank of Lieutenant General and even commanded troops. In 1826, Jarvis and two other Americans he befriended in Greece, Samuel Gridley Howe and Johnathan Miller, made a collective decision to shift their efforts and energize an American relief effort. By 1827, they had all resigned or taken leave from the Greek military to administer the distribution of food and humanitarian aid in Greece. By keeping up constant communication with the Greek Relief Committees in the U.S., Jarvis became instrumental in feeding and clothing thousands of starving refugees. Rarely have individual people pounded their own swords into ploughshares to such a great effect as Jarvis, together with Miller and Howe. 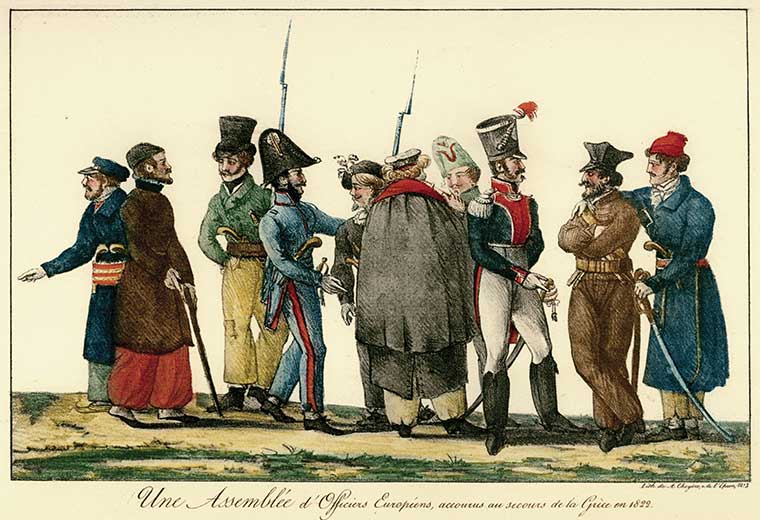 (“A Group of European Officers” by René Puaux is reproduced by kind permission of the Travel Accounts Book Collection ©Onassis Library, Onassis Foundation.)

I have been honoured by an Englishman yesterday with title of Greek, they meant to hurt my feelings by thinking me too much of a Greek. I have no other desire here than to pass for one, and to take all their good qualities. 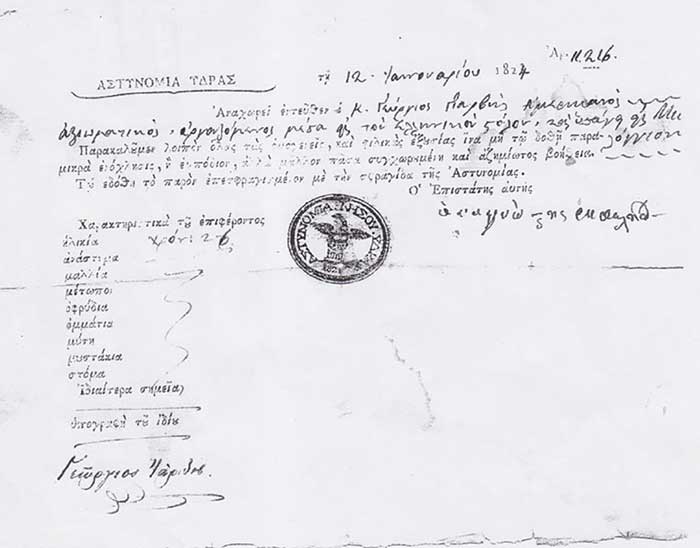 George Jarvis’ passport stating he is an “American officer” serving with the Greek Navy, January 12, 1824. 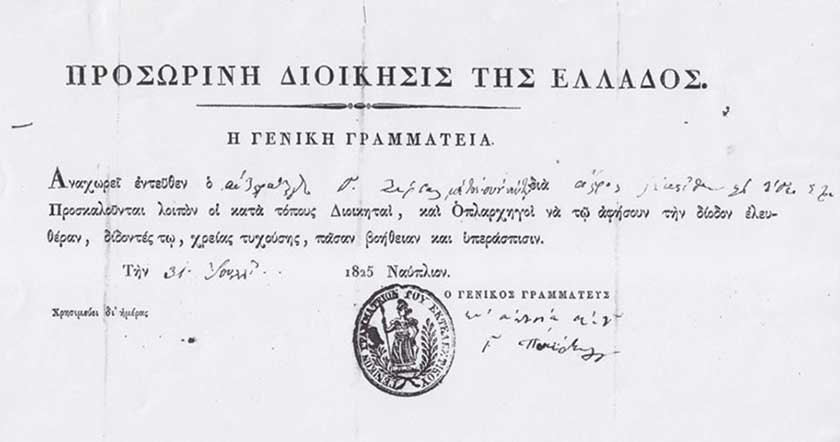 On July 31, 1825, in Nauplion, the ‘Temporary Government of Greece’ issued George Jarvis a letter permitting him to travel to Missolonghi. 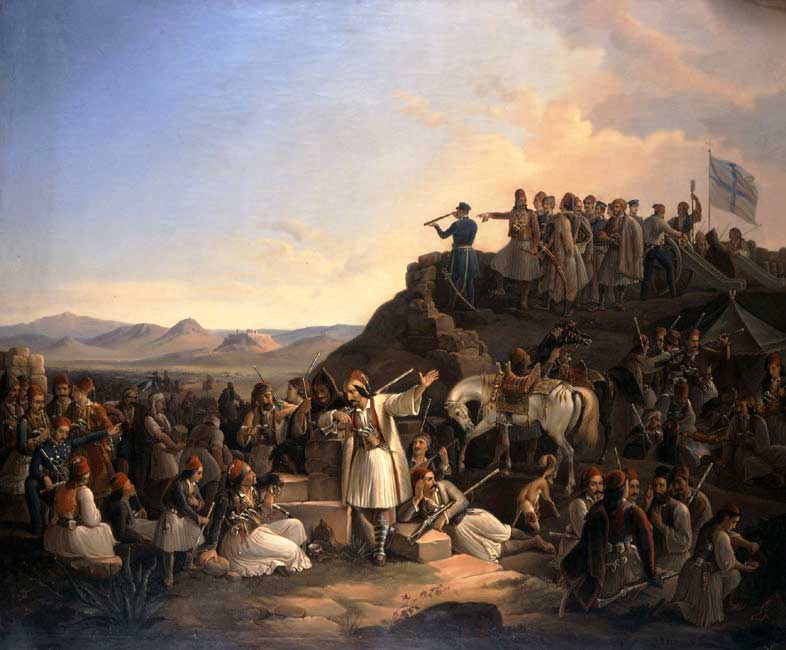 To see these poor Greeks, many without shoes, all without or with the worst of bread, joined, climbing up hills and down dales, to attack the tyrannical aggressor, in defence [sic] of their country—never has an object interested me more, never did I feel more sincerely for my own family, than I did and do for these poor Greeks.

Remember me! my friends, Who here for freedom’s cause remains, In Grecian seas, in Grecian plains, To break the most inglorious chains, And seek humanity. 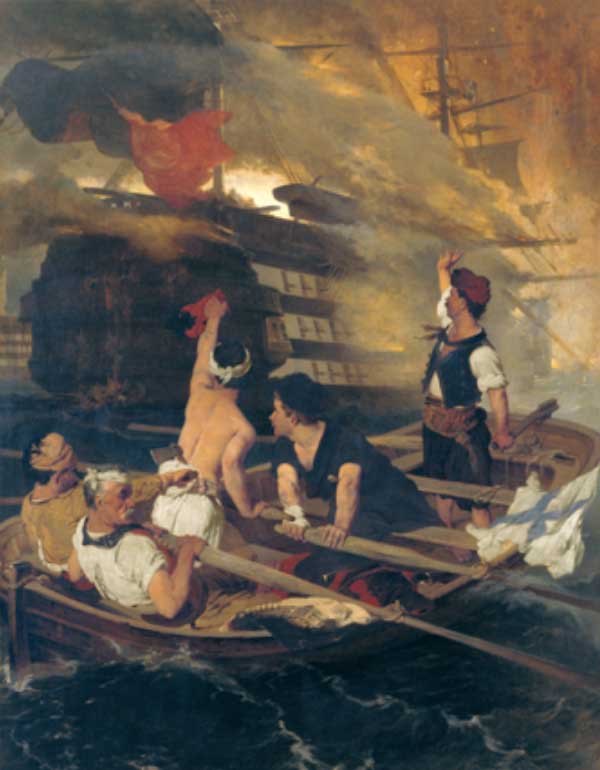 Jarvis saw the destruction of the Turkish flagship, directed by Konstantinos Kanaris. Painting by Nikiforos Lytras, 1873.

George Jarvis served among many notable Greek heroes, and in significant battles

Joined the crew of the ship Themistocles

Sailed with the fleet under Admiral Miaoulis

Travelled with Miller to Nauplion

Taken prisoner with Byron’s doctor, Julius Millingen. Ibrahim hoped to bring them to his side by offering them freedom and a reward. Millingen accepted. Jarvis chose to return to the Greek army.

Served under Georgios Karaiskakis during the attack on Athens in 1827, in which Karaiskakis was killed

Considered making a trip to the United States to promote the relief effort as Miller and Howe had done, but died before he had the opportunity

Died of tetanus in Argos on August 11th

Lord Byron, after arriving in Missolonghi, had taken into his pay a body of Souliotes, who had been homeless since their defeat by Ali Pasha. Known as the Byron Brigade, Jarvis trained them in artillery. Engraving by Thomas Hughes, 1820. 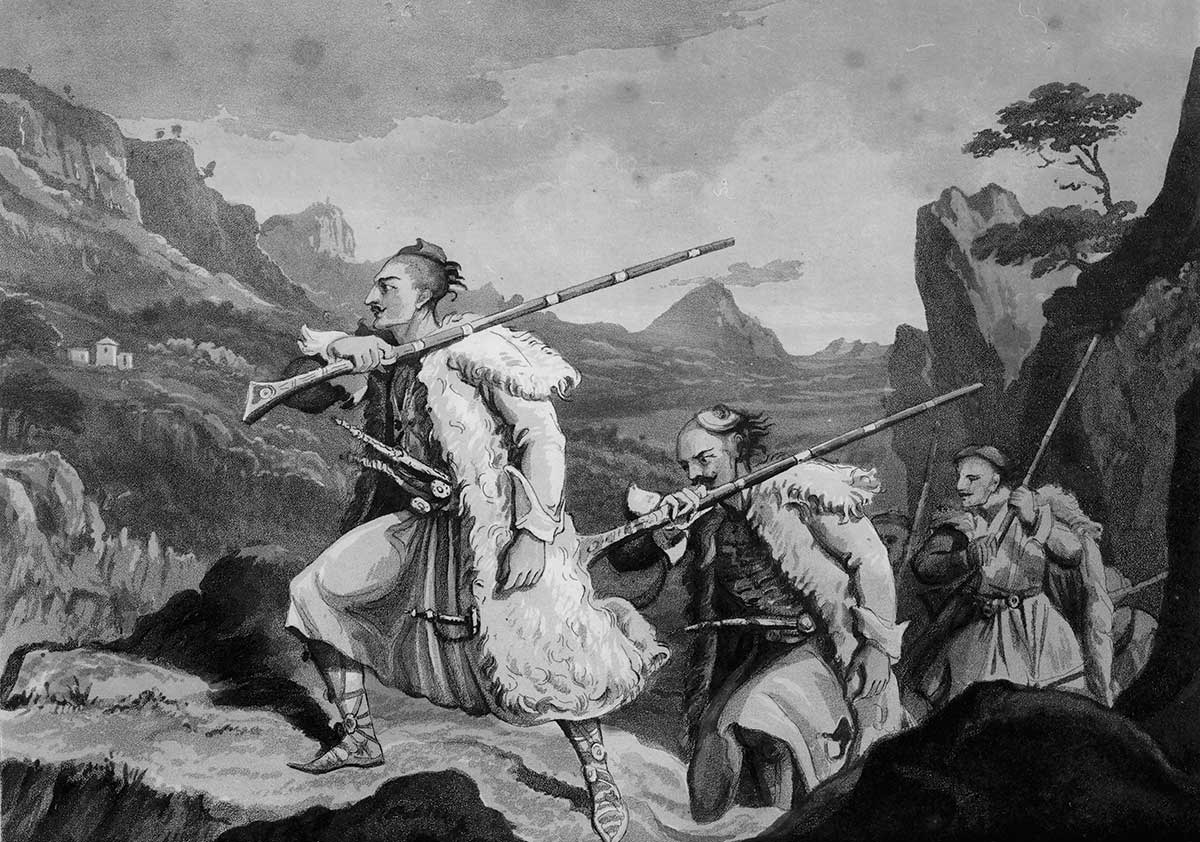