Thomas Jefferson (1743–1826) and James Monroe (1758–1831) openly supported both Greek independence from the Ottomans and Greek desires to be a self-governing republic. As much as they hoped for Greek success, they also expressed restraint. Both believed that the United States could not afford to be entangled in European politics, nor begin a conflict with European powers.

On December 2, 1823, President James Monroe, the fifth President of the United States, issued the famous Monroe Doctrine as part of his Seventh Annual Message to Congress. Monroe’s principal aim was to draw a line that would shield the liberal republics in Latin America from European treachery.

While President Monroe flirted with the idea of formally recognizing the Greek independence movement and sending a minister to Greece, Secretary of State John Quincy Adams (1767–1848) counseled against it. Monroe mentioned Greece, but only sympathetically, so as not to appear hostile to the European powers. The President essentially blessed the Greek cause but did not promise anything further than moral support. For his part, Adams rightly knew that members of Congress and private citizens would not drop the matter.

So what did the Monroe Doctrine mean for Greek Independence? The final paragraphs of Monroe’s statement made clear America’s emotional support for Greece in which he expressed sympathy for the Greek cause and the conviction that the struggle for independence would be crowned with success.

A strong hope has been long entertained, founded on the heroic struggle of the Greeks, that they would succeed in their contest and resume their equal station among the nations of the earth. 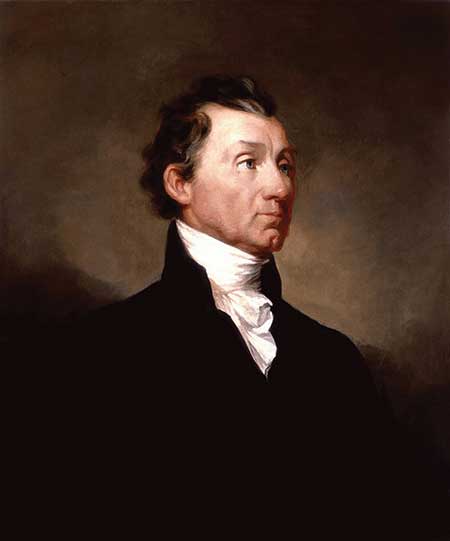 Fifth President of the United States, James Monroe framed the Monroe Doctrine with pressure from his cabinet. His sympathy was with the Greeks in their revolution, but he established a “doctrine” of non-entanglement in European affairs. 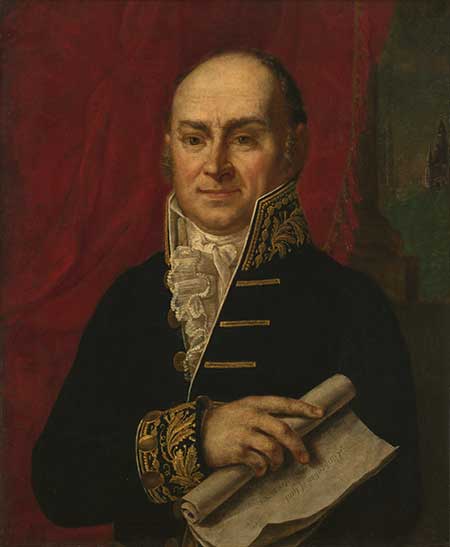 John Quincy Adams persuaded James Monroe to remove the recognition of independent Greece included in an earlier draft. He was not convinced Greece would be successful, and did not want to risk upsetting U.S. trade relations with the Ottoman Empire.

1. The U.S. opposed any future European efforts to establish colonies in the America.

2. European interventions in America would be viewed as hostile acts.

3. The U.S. had no interest in interfering in European internal affairs.

4. America acknowledged the independence of the Latin American republics and viewed their liberty from European interference as consistent with American interests and values.

President Monroe’s Sympathy for Greece in the “Monroe Doctrine” 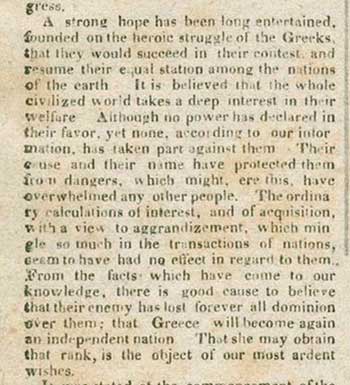 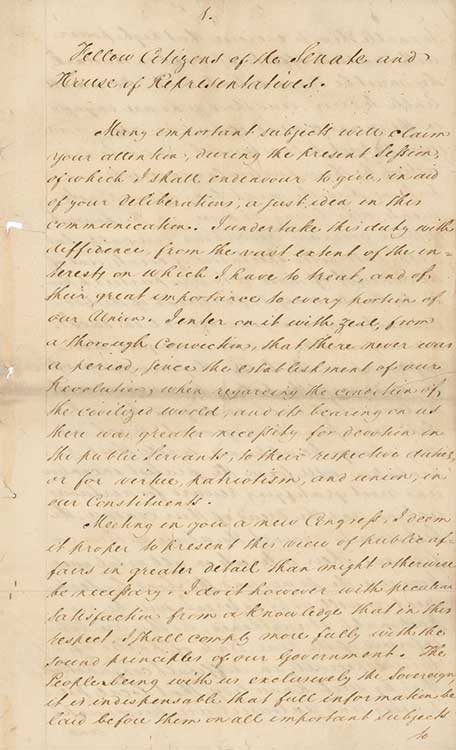 Handwritten first page of President Monroe’s Seventh Annual Address to Congress—now known as the State of the Union—December 2, 1823, which outlined the Monroe Doctrine.

From the facts which have come to our knowledge there is good cause to believe that their enemy has lost forever all dominion over them; that Greece will become again an independent nation. That she may obtain that rank is the object of our most ardent wishes.

Their cause and their name have protected them from dangers which might ere this have overwhelmed any other people. 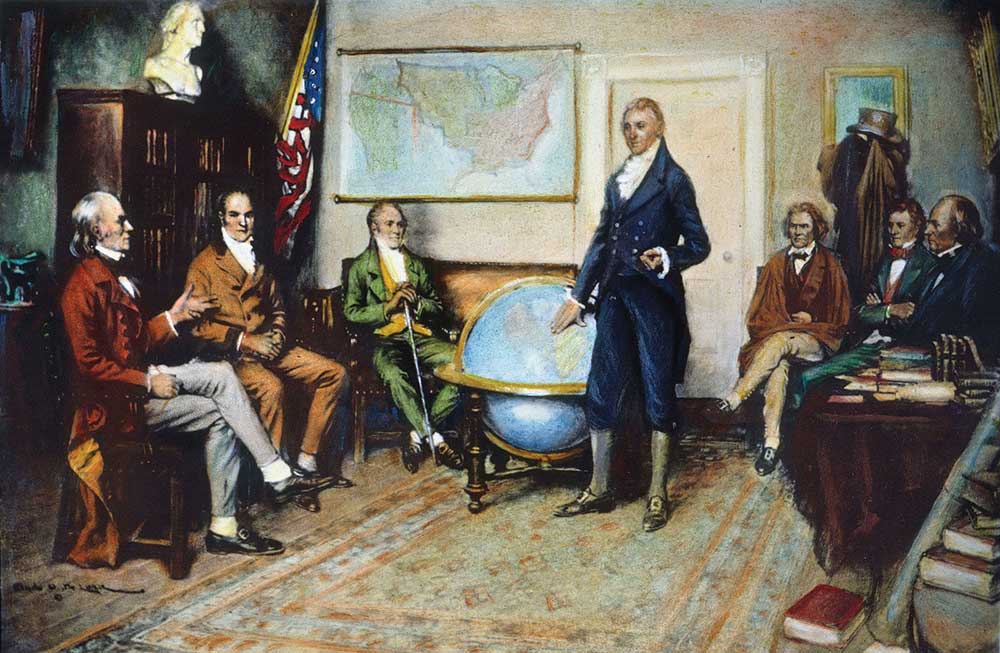 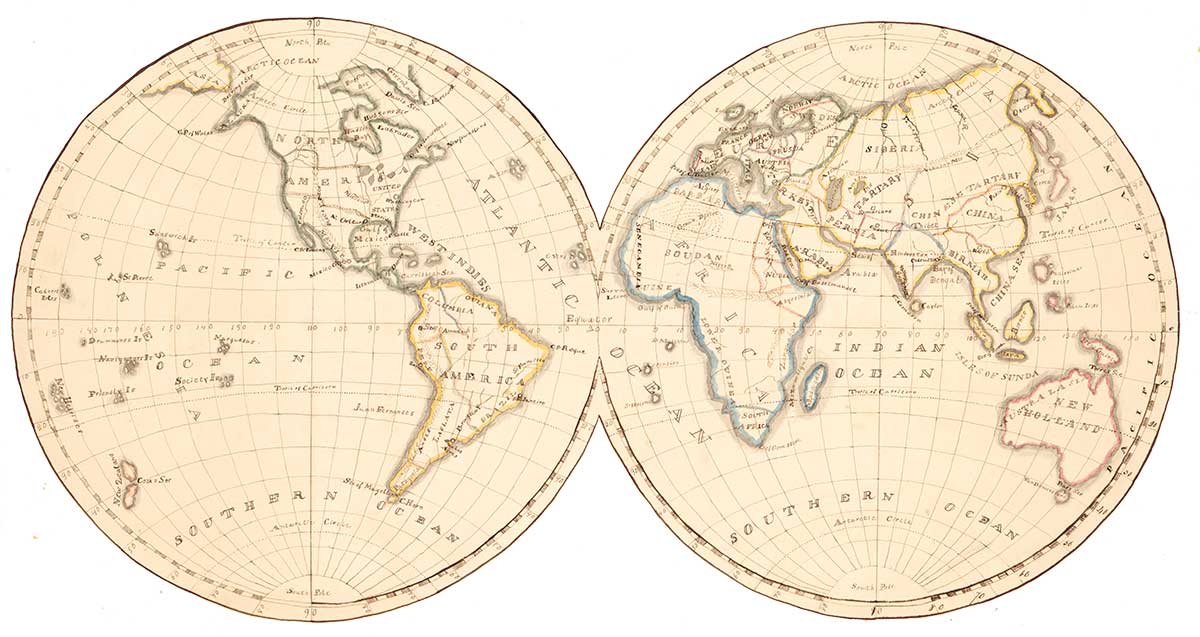