To the American and European public, Greek women were the ultimate victims subject to Ottoman depravity of the harem and the despotism of female slavery. Confirming this was the terrible Ottoman massacre of Scio, or Chios in April 1822, in which 25,000 Greeks were killed and 45,000 became enslaved. Accounts of women and children being sold in the slave markets of Smyrna and elsewhere abounded in the press accounts.

In contrast of the image of the helpless victim, there was also a fascination with the Greek women who resisted, and those who actively fought in the Greek Revolution. The press observed that the Greek Revolution produced several extraordinary females, who showned greatest heroism in the cause of freedom. Accounts of Laskarina Bouboulina (1771-1825), Mado Mavrogenous (1796-1848), and Constante Zacari headlined lead stories of female heroism. Full accounts of their exploits were given. Nevertheless, the sexualized nature of the female was also highlighted, especially in the description of Mado Mavrogenous, who is described as a Grecian beauty. Laskarina Bouboulina, on the other hand, was described with male coarseness. The image of the female hero was most famously immortalized in William Cullen Bryant’s poem, “The Greek Amazon,” that described a maiden in the flower of her life, buckling a pistol and scimitar to her side to share in the tasks of war. 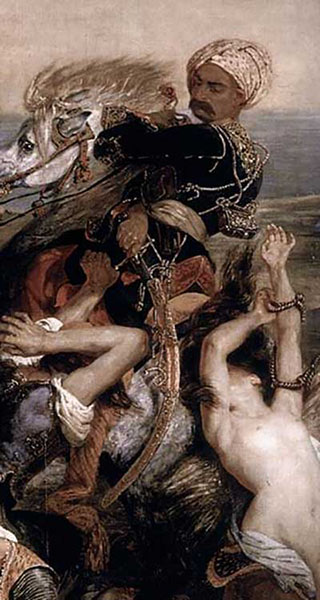 A close up of Eugene Delacroix’s painting Massacres de Scio reveals an eroticized female, a Greek virgin, who is being abducted by an Ottoman on horseback to be violated or end up in a harem. This powerful image of female abduction solidified European and American sympathies towards the Greek cause, and provoked Philhellenic aid in Britain and the United States. 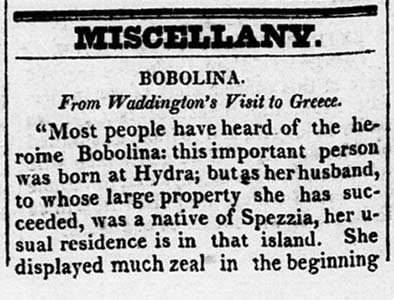 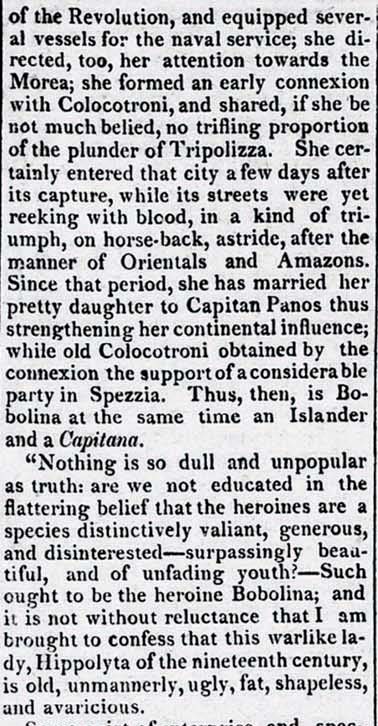 (Courtesy of The Mariner’s Museum and Park)

A U.S. Sailor’s portrait of Laskarina Bouboulina. Joseph Partridge, a young sailor who was also a painter aboard the U.S.S. Warren, which was assigned to protect American merchant ships going through the Greek Archipelago.

Joining the Philike Etairia, she ran a fleet of warships, including the largest Greek ship, the Agamemon, which conducted naval blockades and participated in capturing Monemvasia and Pylos/Navarino. Marrying her daughter to Kolokotronis’ son, she became tied to the family, suffered during the 1824 civil war and was exiled to Spetses. She was killed in a family feud in 1825.

Bobolina [sic] is at the same time an Islander and a Capitana.… Nothing is so dull and unpopular as the truth: are we not educated in the flattering belief that the heroines are a species distinctively valiant, generous, and disinterested—surpassingly beautiful, and unfading youth? – Such ought to be the heroine Bobolina; and it is not without reluctance that I am brought to confess that this warlike lady, Hippolyta of the nineteenth century, is old, unmannerly, ugly, fat, shapeless, and avaricious. 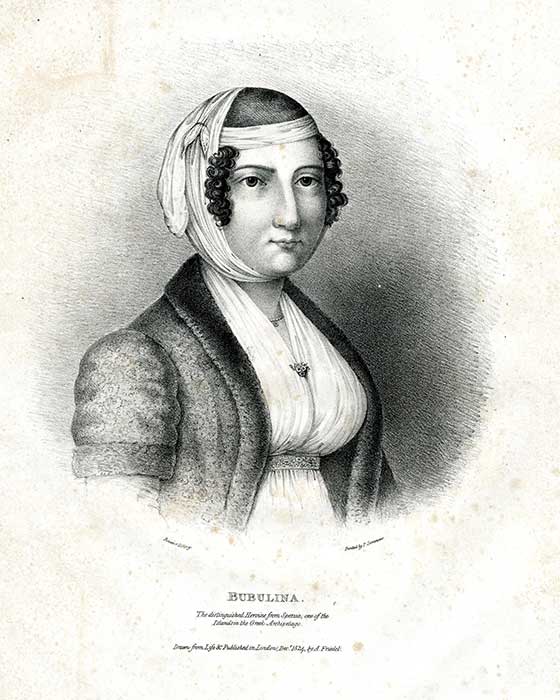 Laskarina Bouboulina took over her husband Demetrios Bouboulis’ shipping business after he was killed fighting Barbary pirates in 1811. 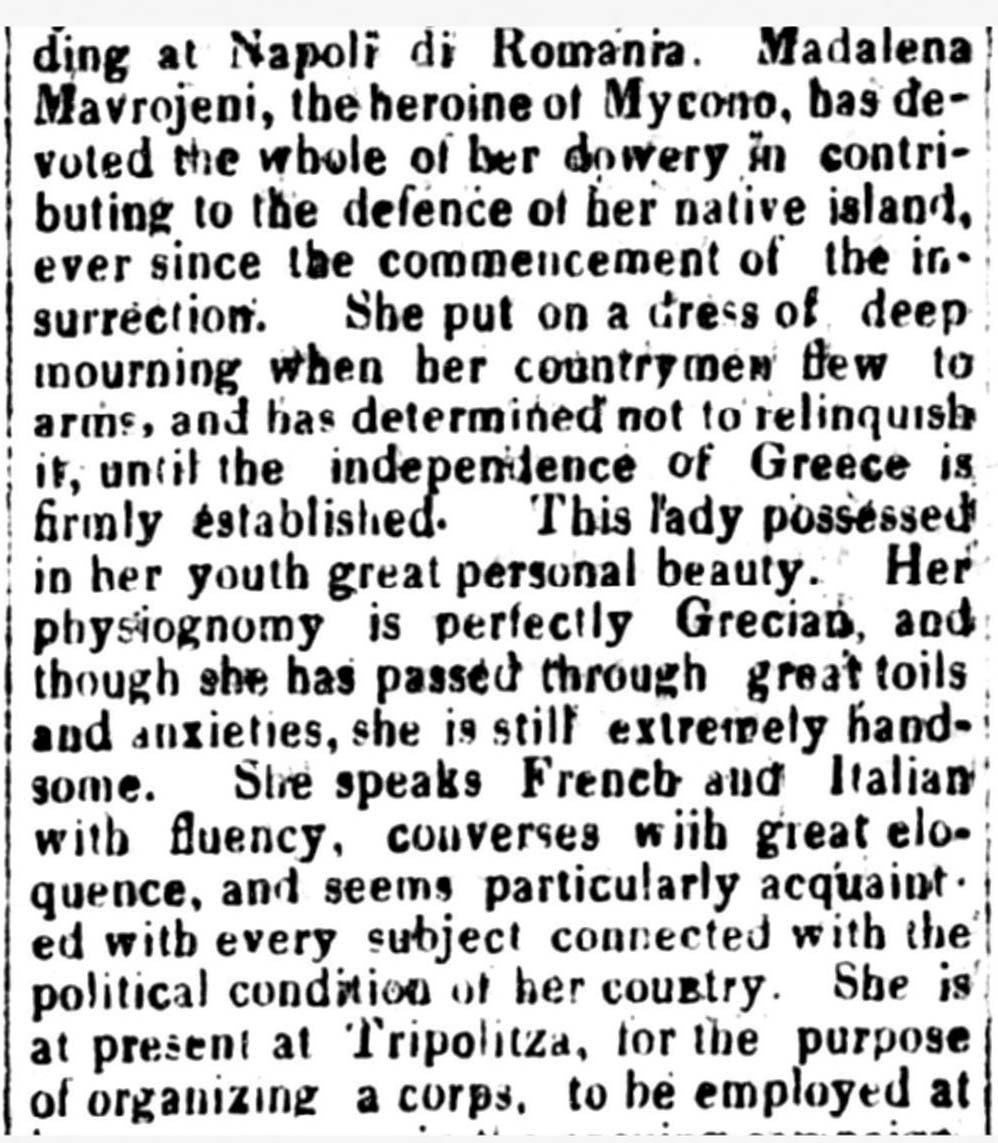 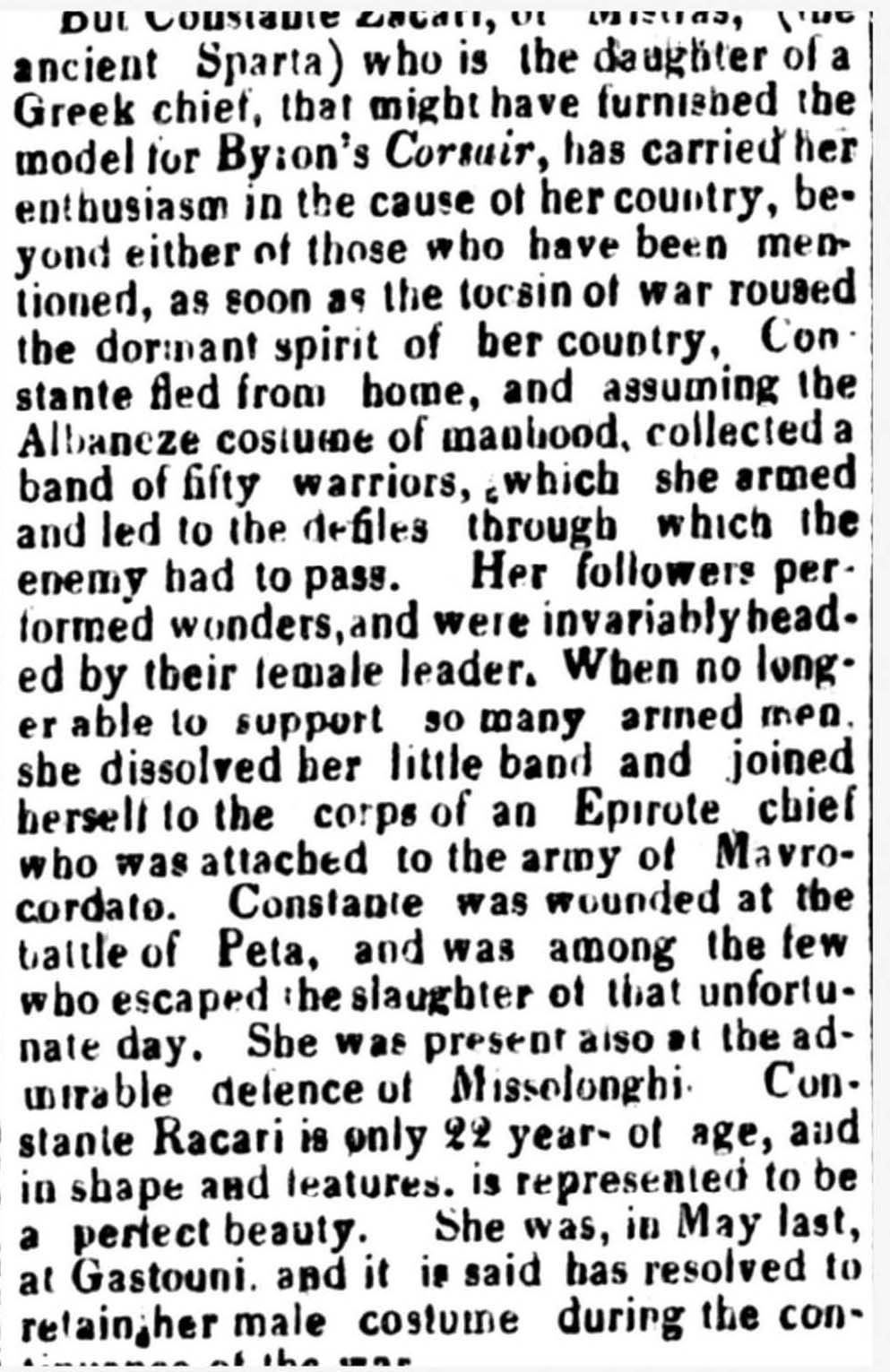 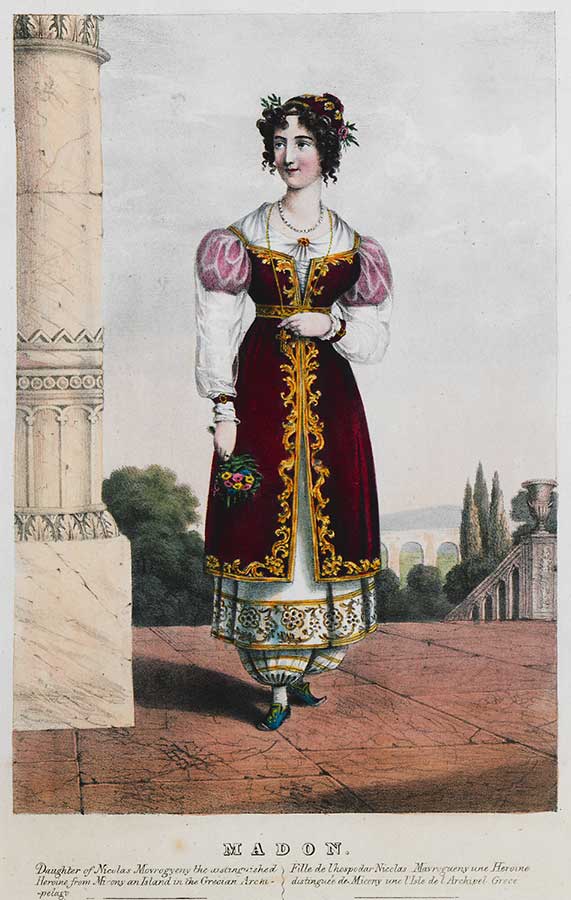 She was the daughter of a merchant and member of the Filike Etairia and grand-neice of the translator (dragoman) of the Ottoman fleet and Prince of Wallachia. When the war broke out, she went to Mykonos, the island of her origins, “privateered” and equipped men to fight in major battles. Engaged to Demetrios Ypsilantis (1793-1832), she fell into disfavor with opposing political parties, and after his death, she was exiled to Nauplion.

Madalena Mavrojeni, the heroine of Mycono, whose zeal and enthusiasm in the cause of her country merits the very highest praise. … Having devoted the whole of her dowry to this sacred purpose, the object of her coming here is to complete the organization of a corps to be employed at her own expense in the ensuing campaign. Though not in the flower of life, she is still extremely handsome: her physiognomy is perfectly Grecian, and must have been uncommonly beautiful ere the toils and anxieties of her present pursuits began. 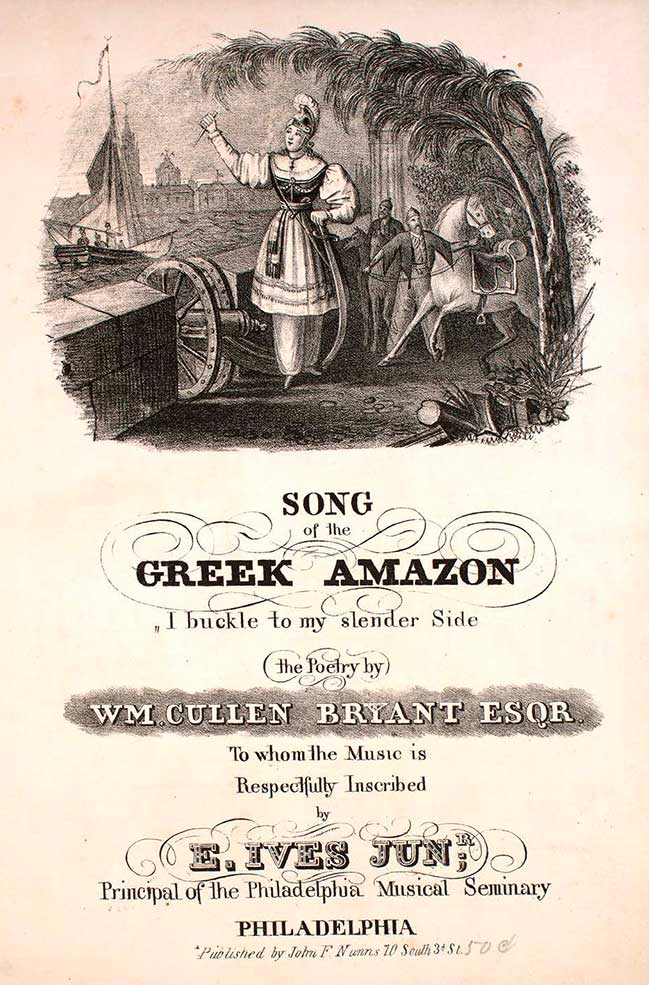 The heroic poem by William Cullen Bryant, “Song of the Greek Amazon,” was put to music and published in Philadelphia to stir up popular enthusiasm for the Greek cause. 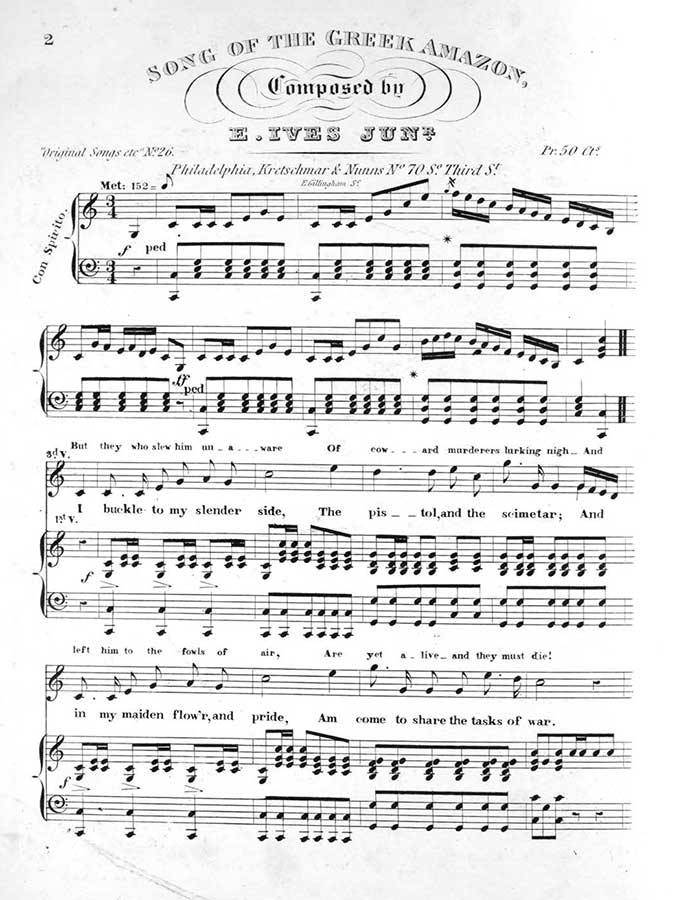 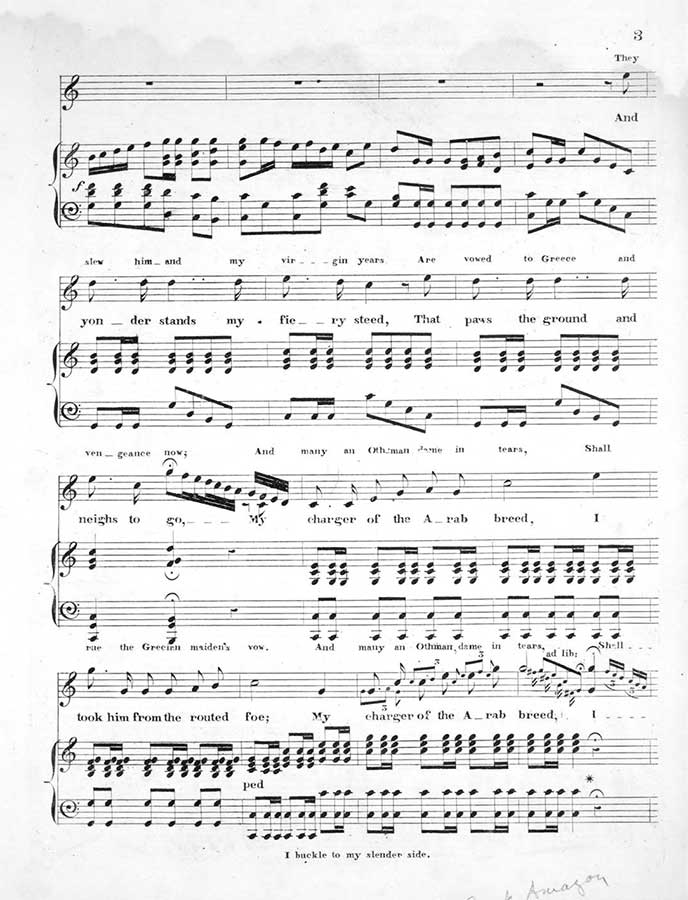 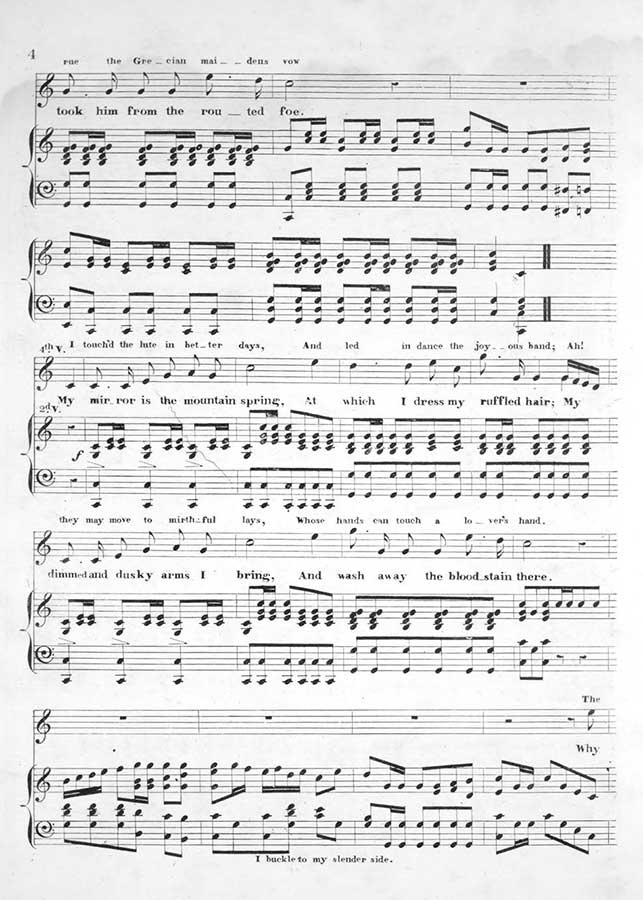 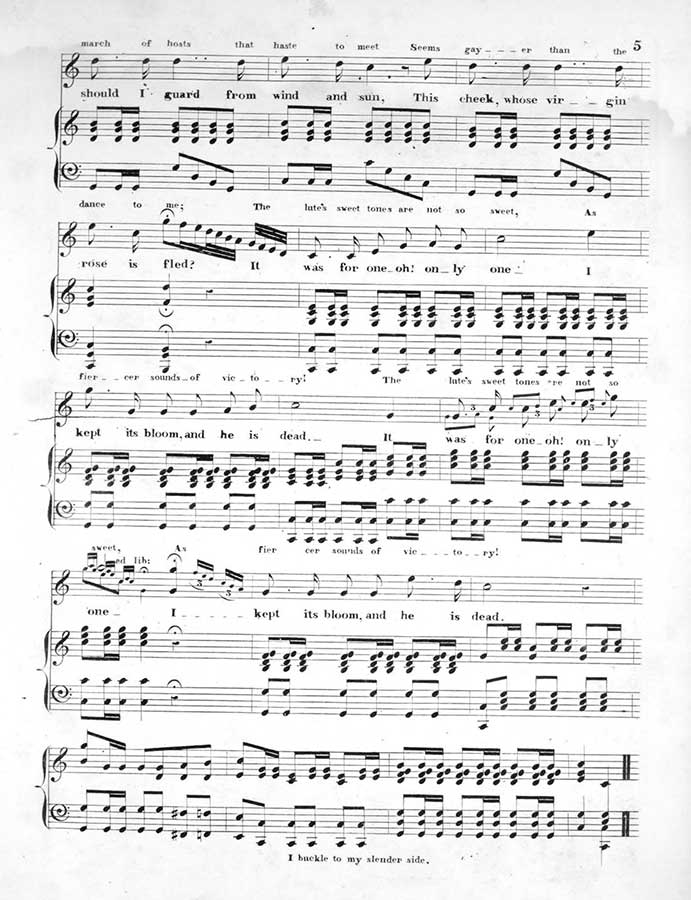 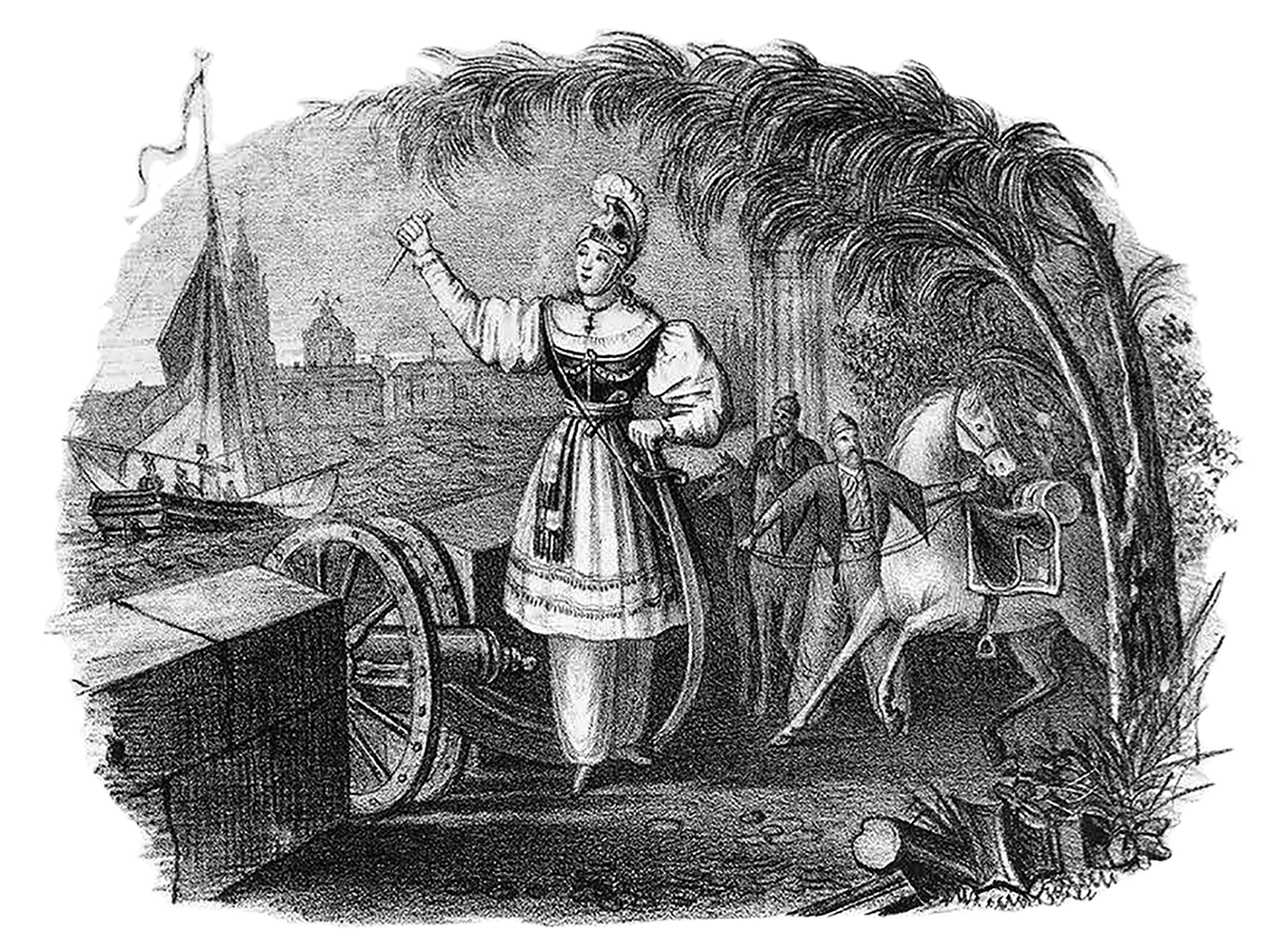