Through the Eyes of Sailors on the USS Constitution 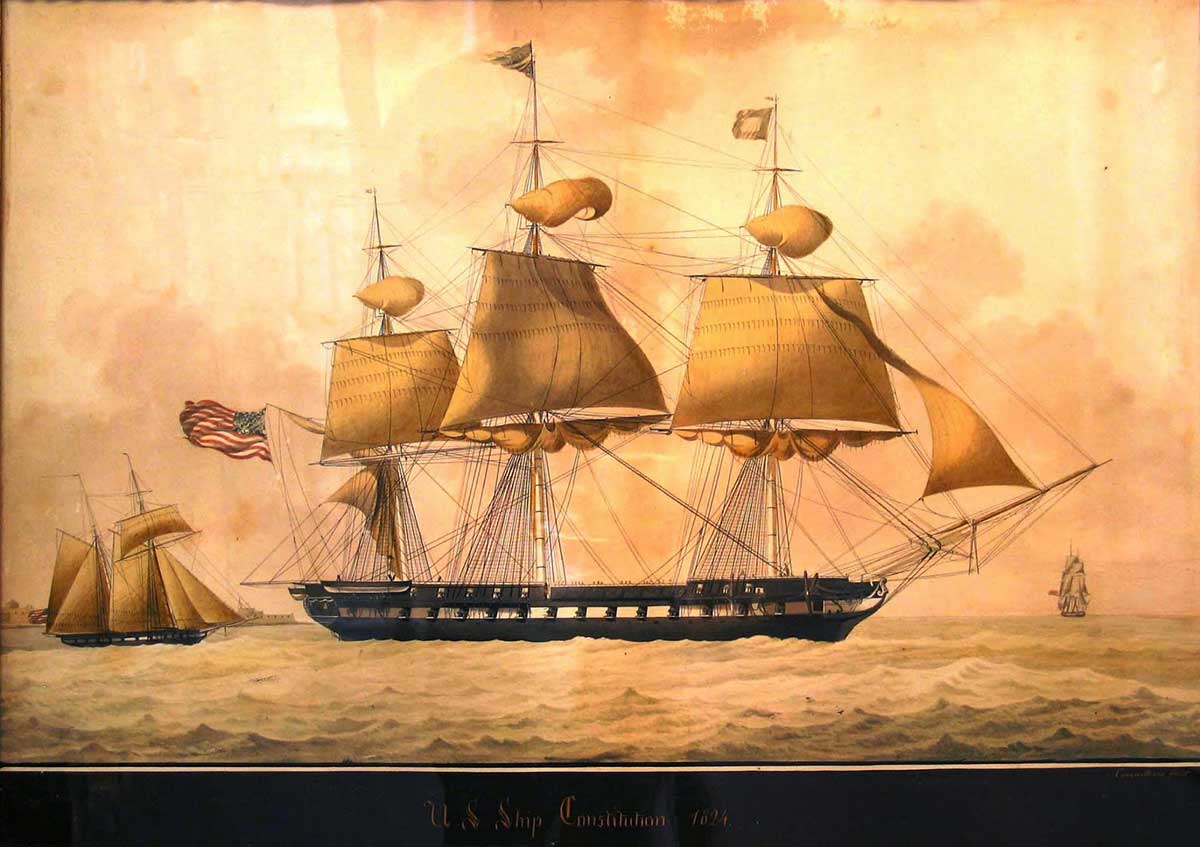 The USS Constitution, pictured here in Nicolo Camillieri’s 1824 painting, and also known as Old Ironsides, was one of six frigates authorized for construction under the Naval Act of 1794. The ship was built in Boston’s North End and sent to Europe to protect trade and participate in the First Barbary War. William Fleming and George Jones traveled the Mediterranean aboard the Constitution in the mid-1820s. The ship is currently berthed at Pier 1 of the historical Charlestown Navy Yard and is part Boston’s Freedom Trail.

In fall 1824, the U.S. Navy ordered the USS Constitution to join America’s squadron in the Mediterranean Sea, under the command of Commodore John Rodgers. Although the United States remained neutral, the Constitution traveled between Greece and Turkey from 1824 until 1828 for purposes of trade and diplomacy. The journals of the vessel’s sailors reveal perspectives that both reflect and challenge the prevailing American idealization of Greeks.

The writings of American marine William Fleming reveal an indifference to the Turks but a fascination and admiration for the Greeks. When, on May 11, 1827, Admiral Konstantinos Kanaris – who had won fame after inflicting significant damage on the Turkish Fleet in retaliation for the massacre at Chios – visited the Constitution, Fleming described him as “one of the bravest men that the Greeks possess” and referred to the “gallant exploits” that endeared him to his countrymen. When General Kolokotronis visited, Fleming described him as “a very majestic looking man, and a great warrior” in the Greek struggle for liberty. Meanwhile, midshipman Edward Clearwater repeatedly referred to “the poor Greeks” receiving relief from Philadelphia and New York, displaying clear sympathy for the Greeks and their plight.

While sailors often expressed sympathy for Greeks as Christians fighting a war against Muslim Turks, and as a civilized nation fighting one deemed barbarian, those who came into direct contact with the Turks could see them in a more favorable light. George Jones (1800–70), a scholar and Protestant minister aboard the ship, described Turks “not the surely, brutal animal, we imagine him” but rather “taciturn” and “polite.” Meanwhile, Jones’ encounters with Orthodox Christianity in Greece and his Evangelical background contributed to his conclusion that “there is no people, not even the Roman Catholics, more superstitious than the Greeks.” In this way, direct contact could challenge generalizations and stereotypes, and maybe even create new ones! 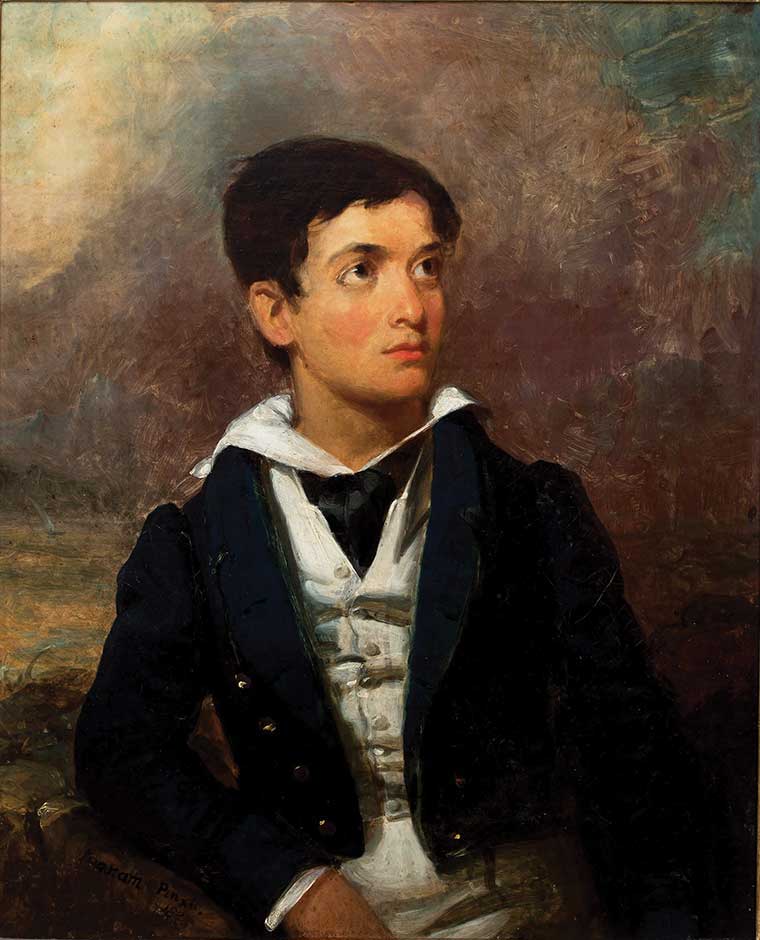 George Ipsara Sirian was born in 1818 on the island of Psara. At seven years old his mother placed him on a small boat to escape the Ottoman massacre and be rescued by an American ship. Taken aboard the USS Constitution with eleven other boys he was brought to the U.S.. Staying on as a cabin boy, in 1827 he joined the crew of the “Old Ironsides” and became a navel gunner. He retired in 1880 and became the longest active duty sailor in U.S. Naval history. 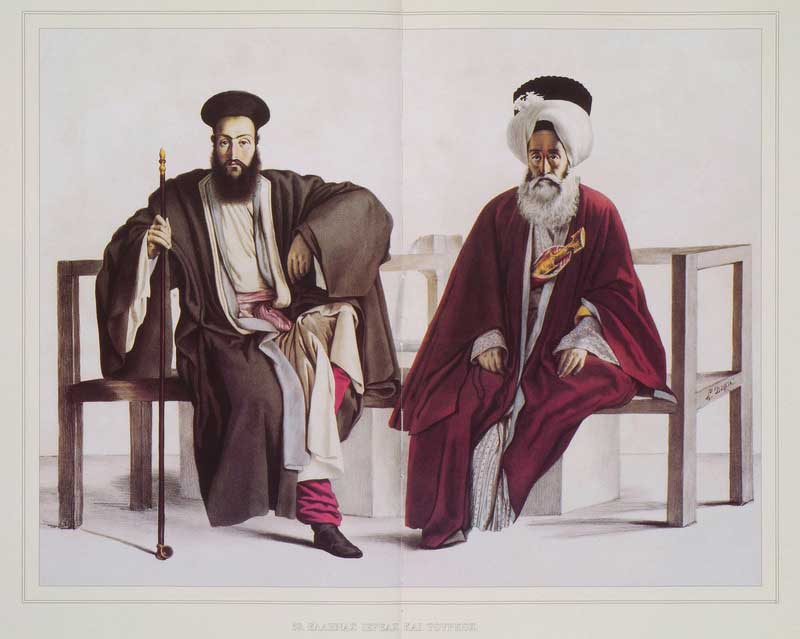 French painter Louis Dupré (1789–1837) traveled to Greece in the early 1820s and captured these two “types” in the Ottoman Empire: the “Greek priest” and “Turkish man.” Images such as these helped frame western perceptions of Greek and Turks.

There is no people, not even the Roman Catholics, more superstitious than the Greeks. 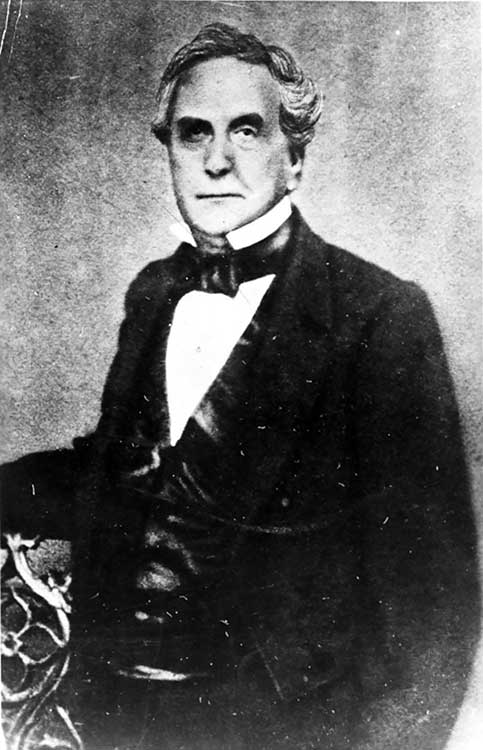 (Photo NH 73418 courtesy of the Naval History and Heritage Command)

George Jones (1800–70), pictured here, traveled the Mediterranean on the Constitution. His observations led to a reevaluation of American stereotypes of Turks and Greeks, mediated not only by his personal experiences but also his perspective and beliefs. Later in life, 1852–54, Jones served as chaplain aboard the USS Mississippi on Commodore Matthew C. Perry’s famous voyage to Japan, which led to the Treaty of Kanagawa and “opening of Japan.”

Admiral Canaris accompanied by some other Greek officers visited our ship. He is a man of about 35 years of age of small stature, but well made with dark penetrating eyes, and of a very mild, modest department. He’s one of the bravest men that the Greeks possess, and his gallant exploits have endured his name dear to his countrymen. 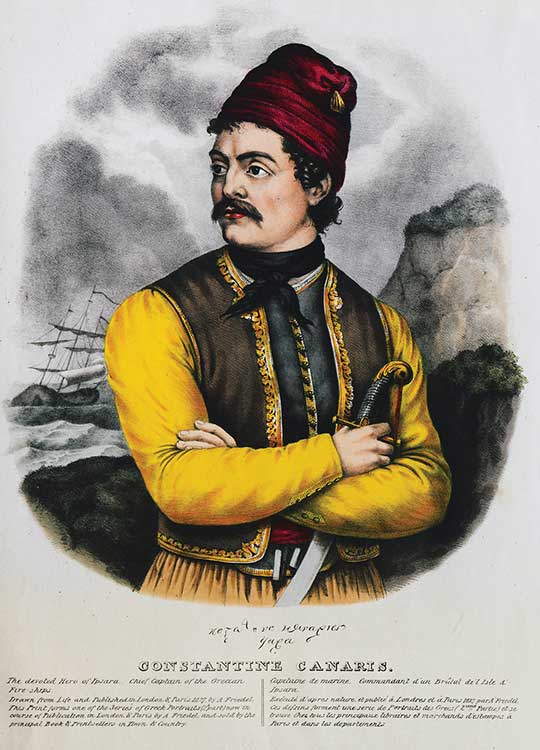 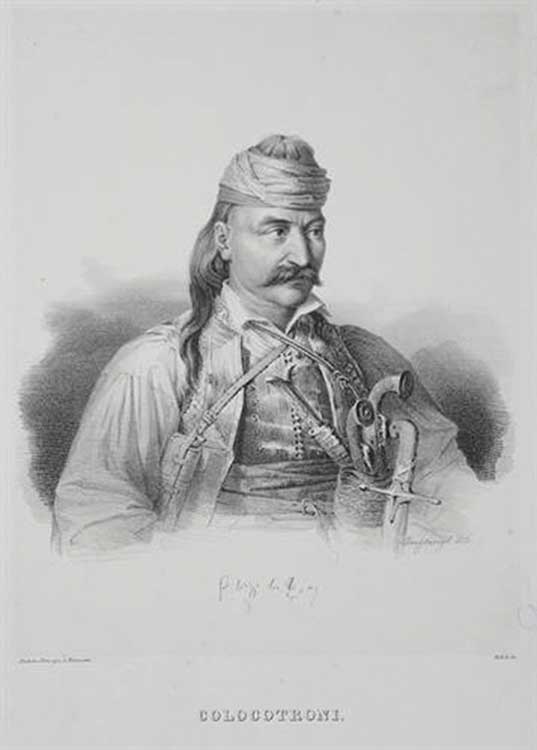 Admiral Canaris accompanied by some other Greek officers visited our ship. He is a man of about 35 years of age of small stature, but well made with dark penetrating eyes, and of a very mild, modest deportment. He’s one of the bravest men that the Greeks possess, and his gallant exploits have endured his name dear to his countrymen. 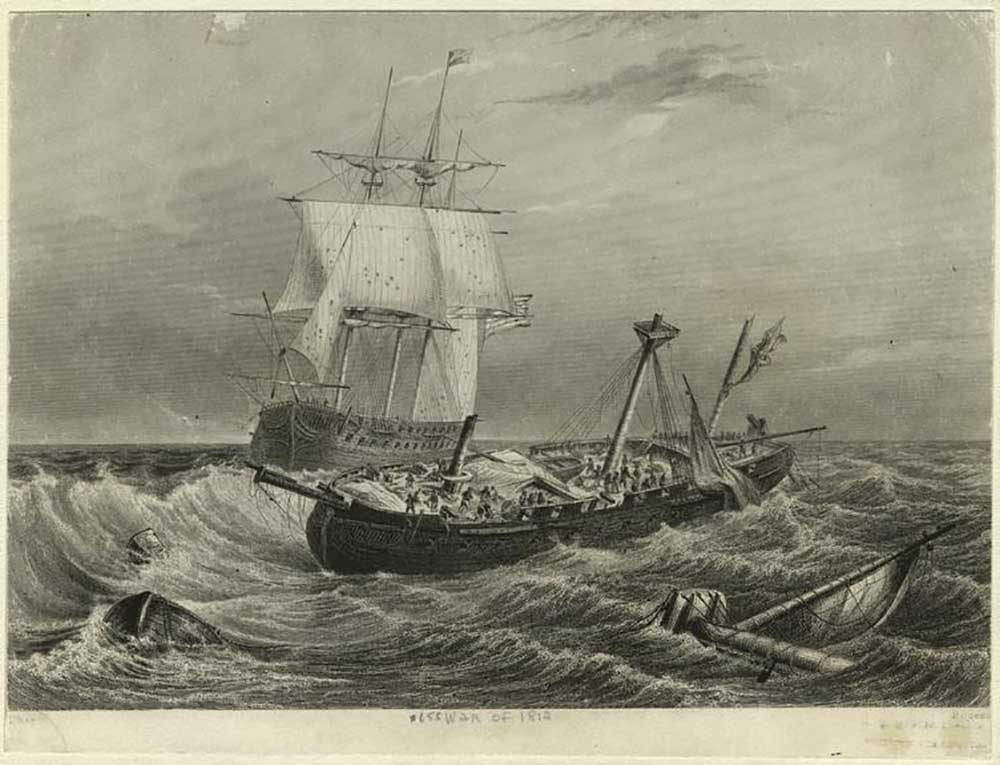 By the time of its Mediterranean expedition, the Constitution had already participated in the War of 1812. Here, she is shown defeating the HMS Guerriere in battle on August 19, 1812.

USS Constitution, 1834. Engraving of Constitution, as moored between the U.S. 74’s Columbus and Independence at Charlestown, Massachusetts, June 1834. 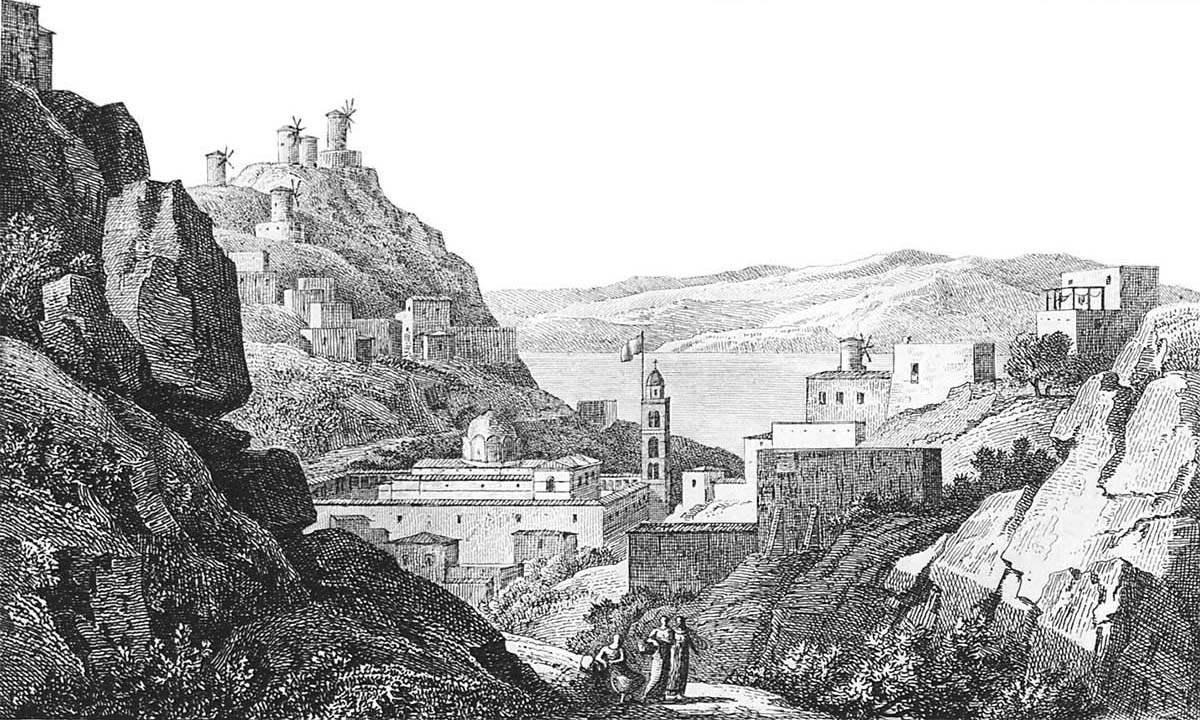