From Revolution to Abolition 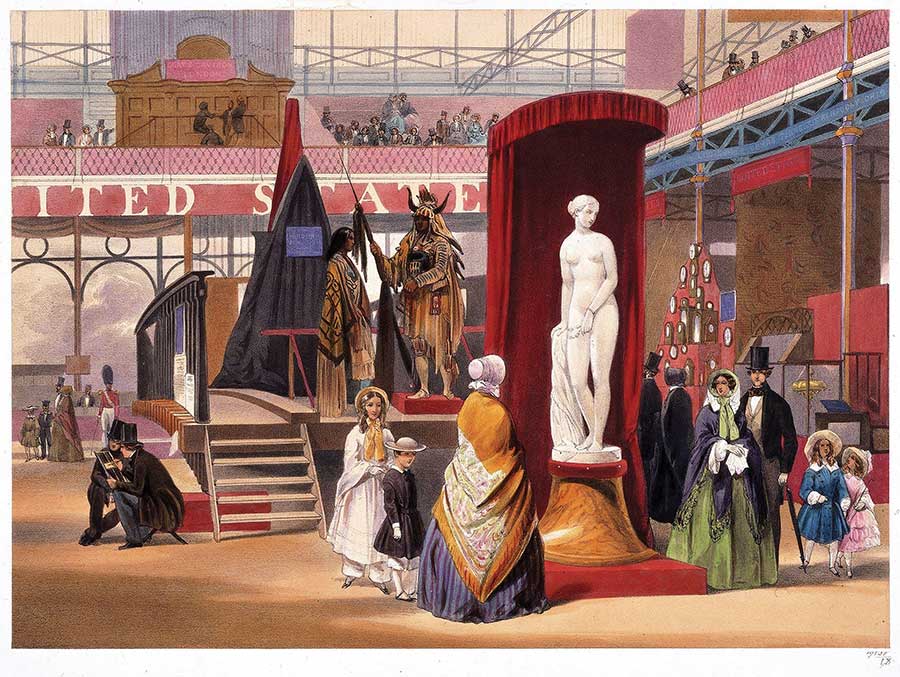 The “1851 Great Exhibition” featured an American exhibit in which the Greek Slave was a prominent feature. From Recollections of the Great Exhibition, 1851 published by Lloyd Brothers & Co., 1851.

As the nation embraced democracy in the 1820s under President Andrew Jackson (1829–37), Americans felt an increasing affinity with Greece as the birthplace of democracy. In contrast with the coarseness and tumult of modern industrialism, Greek antiquity provided a source of great cultural achievements, and an ideal of timeless beauty and culture. Also, sympathy for the Greek cause of revolution had an unmistakable impact on American culture.

The motif of the enslaved Greek Christian woman was first deployed in art in 1822, in Mordecai Noah’s popular play, The Grecian Captive; or, The Fall of Athens. In the play, the protagonist preserves her Christian purity and she and her fellow Greeks are rescued by an American frigate. Americans identified with the Greek fight, which they deemed analogous to their own revolutionary rebellion against British oppression. By 1844, Hiram Powers (1805–73) used this motif for his own sculptural work, The Greek Slave (1844). Powers’ white marble carved statue portrays a nude young Greek woman captured by the Turks and put on the auction block. The statue was displayed in cities across the U.S., attracting hundreds of thousands and a scaled down porcelain version was widely reproduced.

For American anti-slavery activists, including black abolitionists David Walker (1796–1830) and William Wells Brown (1814–84), there was a deep hypocrisy in protesting the Ottoman political oppression of the Greeks while ignoring the horrors of chattel slavery in the American South. Brown was particularly vexed with the ecstatic reception of The Greek Slave statue. Given widespread abolitionist scorn for Powers’ statue, it is surprising to see a 19-inch replica of it in the home of Frederick Douglass (1818–95). 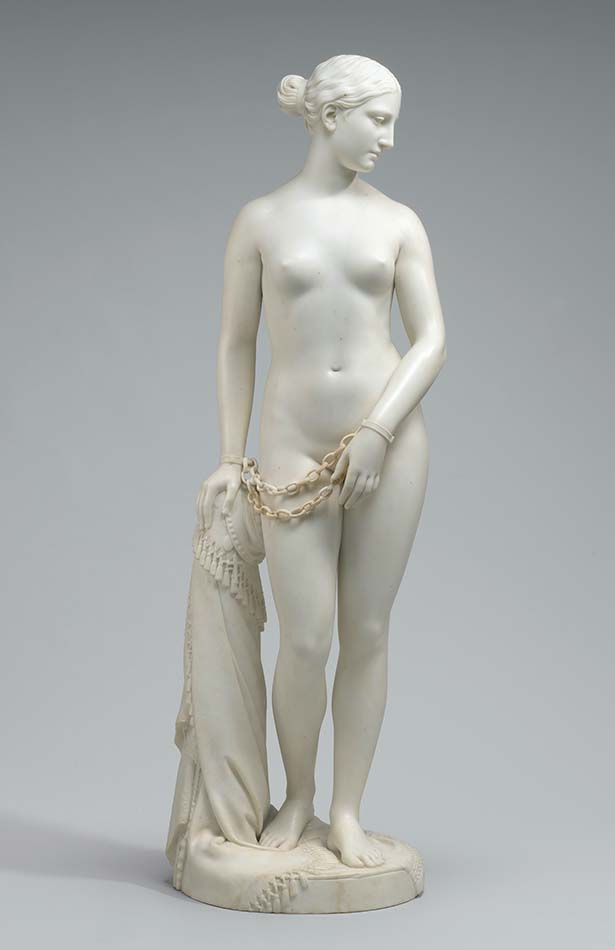 Powers’ original statue was inspired exclusively by atrocities committed by the Turks on the Greeks. He was not a supporter of abolition of American slavery, yet his position evolved as the debate over slavery became heated in the 1850s. Powers created a sixth version in 1866 in which he replaced what he called the “ornamental” chains on the Greek slave with American slave manacles, to better represent American bondage. For his final version of The Greek Slave he decided to make a political statement criticizing not just Ottoman enslavement of Greeks but also American slavery.

She stands exposed to the gaze of the people she abhors, and awaits her fate with intense anxiety, tempered indeed by the support of her reliance upon the goodness of God. 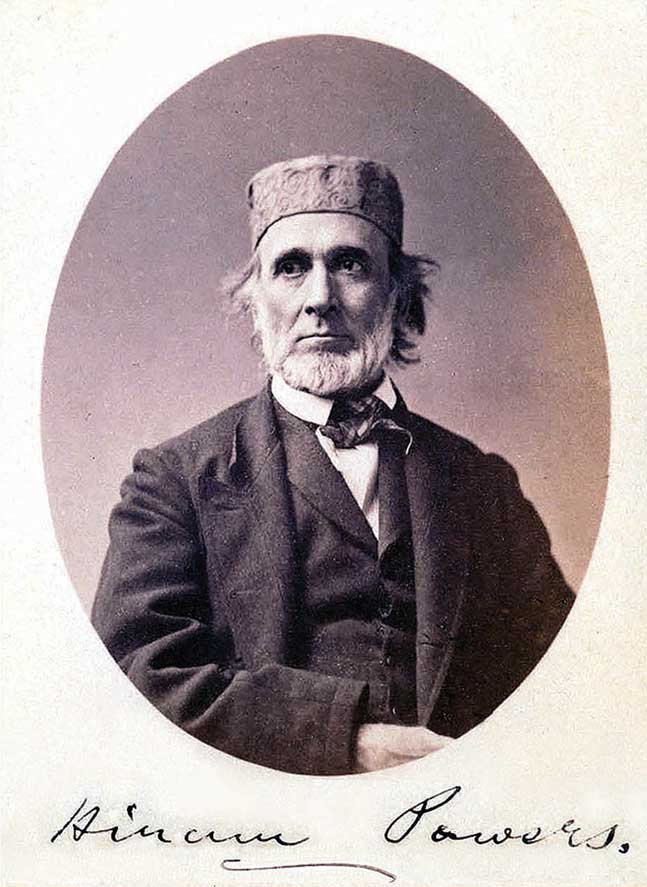 The “Virginia Slave” cartoon that appeared in Punch magazine sought to expose the racism that allowed Americans to sympathize with an imaginary white female slave but to refuse to acknowledge the pain and horrific conditions of the suffering black chattel female slave. 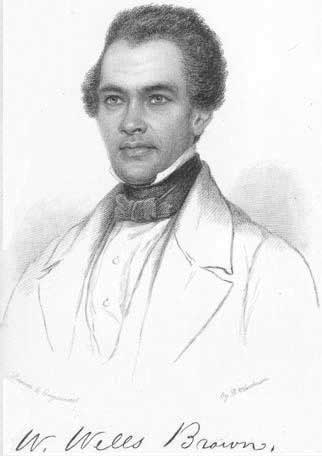 Image of the author, William Wells Brown, from his book, Three Years in Europe: Places I Have Seen and People I Have Met (1852). 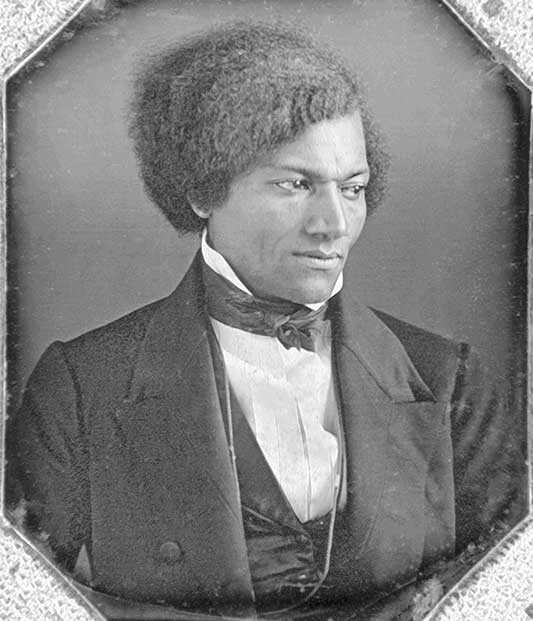 A retouched portrait of Frederick Douglass from the 1840s. 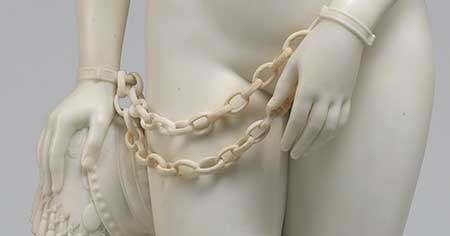 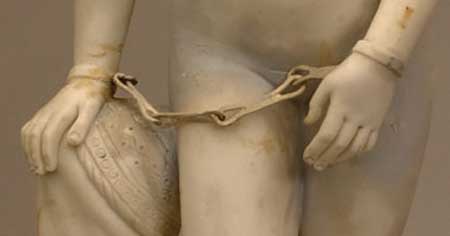 Note the manacles in place of the “ornamental chains.” 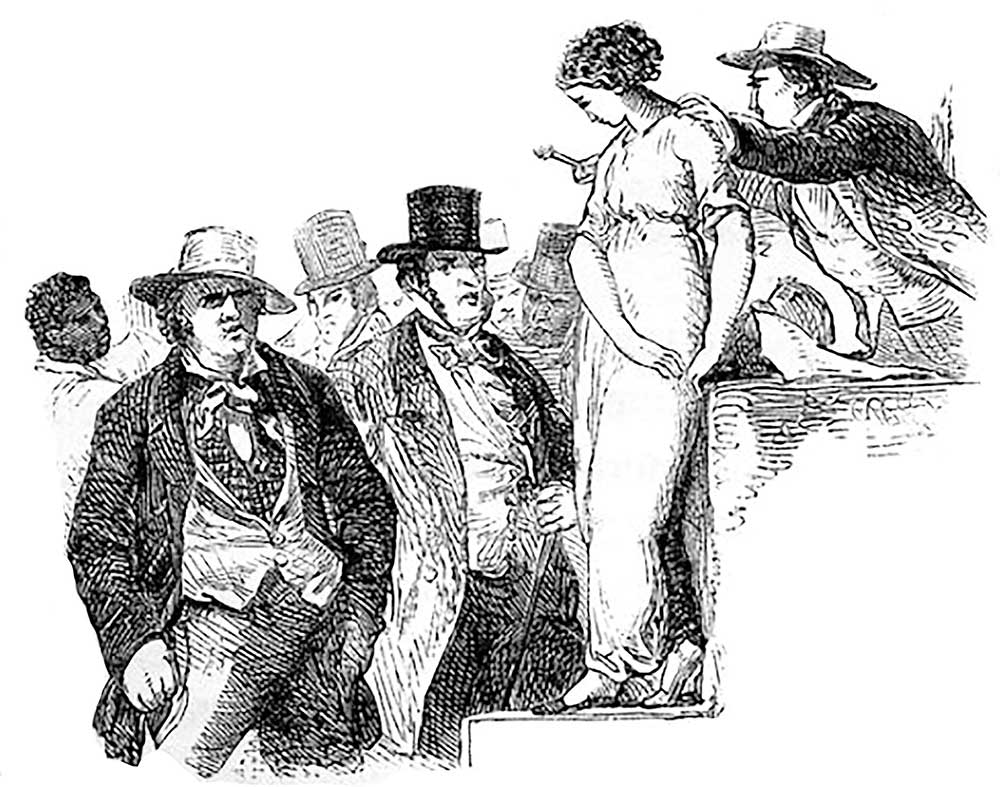